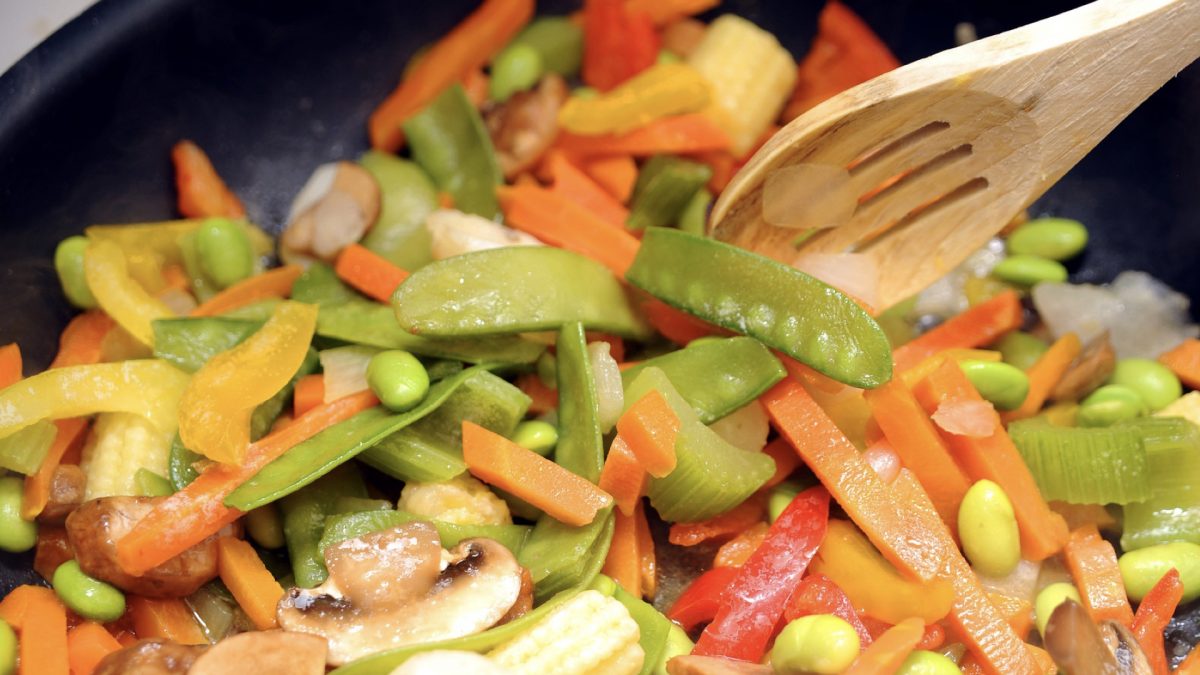 Dr. Dean Ornish showed that a plant-based diet and lifestyle program could apparently reverse the progression of prostate cancer for early stage, localized, watch-and-wait cancer. What about for more advanced stage life-threatening disease?

What about for more advanced-stage, life-threatening disease? There have been sporadic case reports in the literature suggesting benefit. For example, a man with extensive metastatic disease who had been given about three years to live went on a strict plant-based diet. Four years later, it appeared the cancer had disappeared. After six years, he got a little too comfortable, backslid a bit on the diet and began eating “turkey, tuna fish, and chicken,” then the cancer came raging back and he died. But that could have been a total coincidence. That’s the problem with case reports, which are kind of glorified anecdotes. You have no idea how representative the outcome is unless it’s studied formally. But, throughout the 20th century, all we had were these kinds of case reports for more advanced prostate cancer until 2001.

We had “preliminary evidence” based on all the case reports that “prostate cancer may be sensitive to diet even after metastasis develops. Plant-based diets may be associated with prolonged survival and instances of remission of bone metastasis in men with advanced disease.” So, researchers decided to put it to the test in a four-month intervention. They thought that too much saturated fat, too little fiber, and too much meat may be the biggest players in tumor promotion and progression, so they put people on a whole food plant-based diet of whole grains, beans, seeds, and fruits. Figuring this would be quite the departure from their regular diet, the researchers included a stress reduction component in hopes of improving dietary compliance.

Who were the subjects? The ten men in the study didn’t just have prostate cancer—they had all undergone a radical prostatectomy to remove their primary tumor and then subsequently had increasing PSA levels, indicative of probable metastatic disease. PSA stands for prostate-specific antigen. It’s only made by prostate cells, but the ten men had just had their entire prostates removed so their levels should have been zero. The fact that they not only still had some PSA, but that it was rising suggests that the surgery had failed, and the cancer had spread and was making a comeback.

At 2:43 in my video Treating Advanced Prostate Cancer with Diet: Part 1, you can view a graph showing the PSA levels for each of the men before the study began and see the speed at which their PSAs went up. If their PSA trajectories had stayed the same after four months of eating healthfully, it would mean the diet had had no effect. In that case, presumably, the cancer would have still been powering away and spreading just as fast as before. Instead, in two of the men, it looked as if the cancer had accelerated and grew even faster, but in the other eight men, the intervention appeared to work, apparently slowing down cancer growth. And, in three of the ten men, it didn’t just slow or stop, but appeared to reverse and shrink.

Why the different responses? Well, in the Ornish study, the more people complied with the diet and lifestyle recommendations, the better they did, as you can see at 3:31 in my video. Dietary changes only work if you actually do them. Just because you tell people to start eating a whole food plant-based diet, doesn’t mean patients actually do it. One can use fiber intake as a proxy for dietary compliance because all whole plant foods have fiber, and Ornish’s patients about doubled their fiber intake from 31 grams to 59 grams.

How did the ten men in the 2001 study do? They started out even worse, averaging 14 grams of fiber a day, and only made it up to 19 grams a day. That’s not a whole food plant-based diet—that doesn’t even meet the recommended minimum daily intake. As you can see at 4:18 in my video, only four of the ten men even increased their fiber intake at all, so that may explain the different responses. In fact, the man whose fiber improved the most had the best PSA result, and the man whose fiber intake dropped the most had the worst PSA result. Indeed, it appears the more changes they made to their diet, the better their results.

The researchers concluded that “a plant-based diet delivered in the context of MBSR [Mindfulness-Based Stress Reduction]…may slow the rate of tumor progression,” and, unlike other treatments, may give patients some control over their disease. And, as Ornish pointed out, “the only side effects are beneficial ones.”

Dr. Ornish and colleagues were able to show an apparent reversal in the progression of early-stage, localized prostate cancer with a plant-based diet and lifestyle program, and researchers at the University of Massachusetts and elsewhere showed a similar diet may help slow the progression of even advanced prostate cancer over a period of four months.

How about over six months? As I discuss in my video Treating Advanced Prostate Cancer with Diet: Part 2, researchers at University of California, San Diego put cancer patients through the same protocol as the four-month study. Once again, these were patients who had already been treated for invasive prostate cancer by either radical prostatectomy or radiation therapy, yet still had rising PSA levels, suggesting the treatment didn’t work and the cancer was on the move. “In those who have undergone a [cancer] recurrence, PSA typically tends to rise exponentially after prostatectomy or radiation therapy, reflecting the gradual, inexorable growth of the cancer in the body. After local treatment, the rate of PSA rise is the single best predictor of…development of overt metastatic disease, as well as of overall survival.” The next step would be hormonal therapy, which is chemical or surgical castration, but that has a list of side effects, including loss of libido, sexual function, strength, and vitality. “Therefore, many physicians employ a strategy of active surveillance” and try to hold off for as long as possible. If we’re just waiting, why not give diet a try?

Patients were “taught to increase intake of whole grains, vegetables, fruit, and legumes and to decrease meat, dairy, and refined carbohydrates.” Of all possible lifestyle interventions, why a whole food plant-based diet? If you look around the world, there are huge differences in prostate cancer rates, as you can see at 1:42 in my video, and our We’re #1! USA! USA! rates are up to a hundred times higher than some places in Asia, for example—and it’s not just genetic. Within one generation of migrating to the United States, cancer rates shoot up, and the grandkids of the immigrants end up with the same top-of-the-pile “approximate US rates.” A whole range of lifestyle factors have been looked at, but diet appears to have the greatest influence.

Specifically, “consumption of meat and dairy appears to increase risk, and consumption of plant-based foods appears to decrease risk.” Hence, the plant-based diet. A possible mechanism found in both meat and dairy products is arachidonic acid, an inflammatory compound that we make from omega-6-rich oils, like corn, sunflower, safflower, and cottonseed oils. It also comes “preformed” in animal-based foods and, in the American diet, is found particularly in chicken and eggs. In a petri dish, arachidonic acid appears to stimulate prostate cancer cell growth as much 200 percent, as you can see at 2:43 in my video.

So what happened when those researchers at University of California, San Diego asked men to remove processed and animal foods from their diet for six months? At 2:57 in my video, you can see a graph showing how fast the cancer patients’ PSA levels had been rising before starting the study. “In the absence of treatment, absolute levels of PSA tend to increase exponentially,” but upon eating more healthfully, nine of the ten study subjects showed an apparent slowing of cancer growth and four of the nine showed an apparent reversal in cancer growth. The average doubling time, an estimate of how long it would take for their cancer to double in size, slowed from doubling every year to closer to every ten years.

Other studies have used various diets and nutritional interventions, like vitamin supplements, but none has worked as well as this one—and the subjects’ compliance wasn’t even all that great. As you can see at 3:41 in my video, they did well in boosting their whole grain consumption in the first three months, but then backslid a bit, and they ate more vegetables, including a serving of greens, and an extra serving of fruit, at least early on. And, in the beginning, they at least ate one whole serving of legumes a day. So the researchers “did observe some [dietary] recidivism by 6 months,” with subjects sliding back into old habits. Given that, they checked to see if the study participants were better able to beat off the disease during that earlier period. And, indeed, at the end of the first three months, on average, there was PSA reversal. “Changes in the rate of rise in PSA, an indicator of disease progression, were in the opposite direction as changes in the intake of plant-based food groups, raising the provocative possibility that PSA may have inversely tracked intake of these foods and suggesting that adoption of a plant-based diet may have therapeutic potential in the management of this condition.”

Their findings suggest that, without further surgery, radiation, or chemotherapy, disease progression can be slowed or even reversed, despite “the prevailing scientific consensus…that cancer progression is largely irreversible.” The researchers state their “findings do not refute the benefits of standard therapies or guarantee that a plant-based diet and stress reduction will always induce remission,” but their results “do contribute to a growing [medical] literature that suggests that in at least some circumstances, cancer may be partly reversible and that modification of dietary and lifestyle factors may be able to help prevent disease spread”—all without getting their testicles cut off.

Hold on. We can make men’s bloodstreams nearly eight times better at suppressing cancer cell growth? See How Not to Die from Cancer.

It’s not all or nothing, though. Any movement we make towards healthy eating may help. See Prostate Cancer Survival: The A/V Ratio .