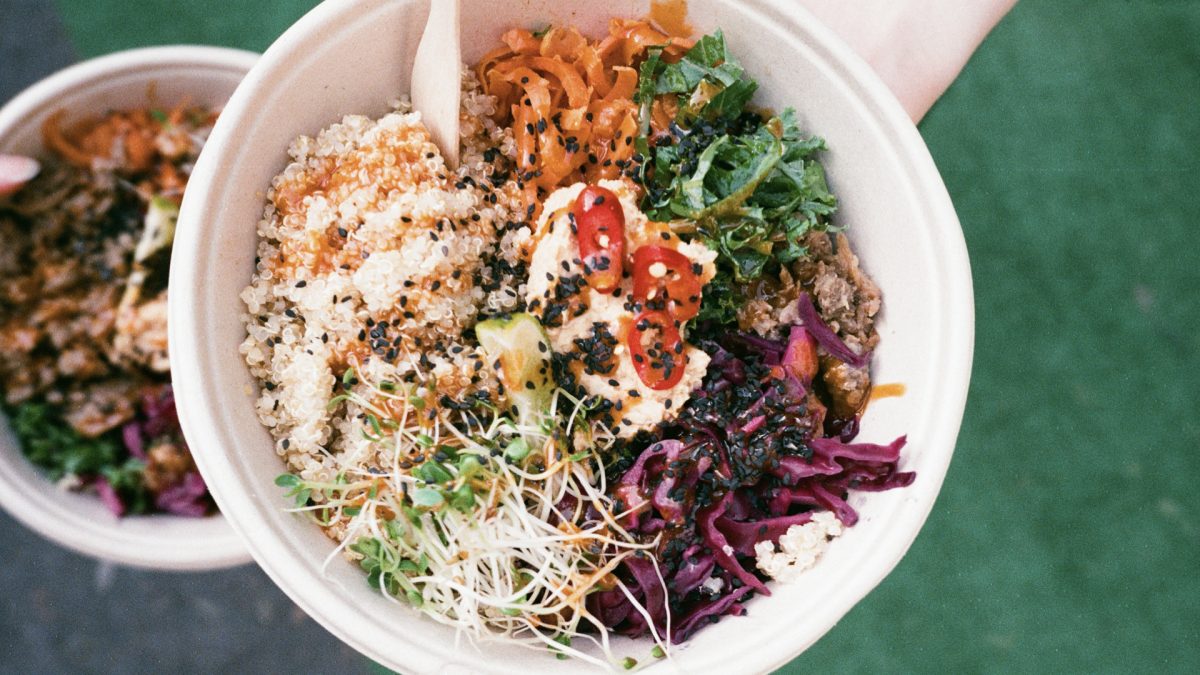 Good bacteria, those living in symbiosis with us, are nourished by fruits, vegetables, grains, and beans, whereas bad bacteria, those in dysbiosis with us and possibly contributing to disease, are fed by meat, junk food and fast food, seafood, dairy, and eggs, as you can see at 0:12 in my video Microbiome: We Are What They Eat. Typical Western diets can “decimate” our good gut flora.

We live with trillions of symbionts, good bacteria that live in symbiosis with us. We help them, and they help us. A month on a plant-based diet results in an increase in the population of the good guys and a decrease in the bad, the so-called pathobionts, the disease-causing bugs. “Given the disappearance of pathobionts from the intestine, one would expect to observe a reduction in intestinal inflammation in subjects.” So, researchers measured stool concentrations of lipocalin-2, “which is a sensitive biomarker of intestinal inflammation.” As you can see at 1:13 in my video, within a month of eating healthfully, it had “declined significantly…suggesting that promotion of microbial homeostasis”—or balance—“by an SVD [strict vegetarian diet] resulted in reduced intestinal inflammation.” What’s more, this rebalancing may have played a role “in improved metabolic and immunological parameters,” that is, in immune system parameters.

In contrast, on an “animal-based diet,” you get growth of disease-associated species like Bilophila wadsworthia, associated with inflammatory bowel disease, and Alistipes putredinis, found in abscesses and appendicitis, and a decrease in fiber-eating bacteria. When we eat fiber, the fiber-munching bacteria multiply, and we get more anti-inflammatory, anti-cancer short-chain fatty acids. When we eat less fiber, our fiber-eating bacteria starve away.

They are what we eat.

Eat a lot of phytates, and our gut flora get really good at breaking down phytates. We assumed this was just because we were naturally selecting for those populations of bacteria able to do that, but it turns out our diet can teach old bugs new tricks. There’s one type of fiber in nori seaweed that our gut bacteria can’t normally breakdown, but the bacteria in the ocean that eat seaweed have the enzyme to do so. When it was discovered that that enzyme was present in the guts of Japanese people, it presented a mystery. Sure, sushi is eaten raw, so some seaweed bacteria may have made it to their colons, but how could some marine bacteria thrive in the human gut? It didn’t need to. It transferred the nori-eating enzyme to our own gut bacteria.

“Consequently, the consumption of food with associated environmental bacteria is the most likely mechanism that promoted this CAZyme [enzyme] update into the human gut microbe”—almost like a software update. We have the same hardware, the same gut bacteria, but the bacteria just updated their software to enable them to chew on something new.

Hardware can change, too. A study titled “The way to a man’s heart is through his gut microbiota” was so named because the researchers were talking about TMAO, trimethylamine N-oxide. As you can see at 3:33 in my video, certain gut flora can take carnitine from the red meat we eat or the choline concentrated in dairy, seafood, and eggs, and convert it into a toxic compound, which may lead to an increase in our risk of heart attack, stroke, and death.

This explains why those eating more plant-based diets have lower blood concentrations of TMAO. However, they also produce less of the toxin even if you feed them a steak. You don’t see the same “conversion of dietary L-carnitine to TMAO…suggesting an adoptive response of the gut microbiota in omnivores.” They are what we feed them.

As you can see at 4:17 in my video, if you give people cyclamate, a synthetic artificial sweetener, most of their bacteria don’t know what to do with it. But, if you feed it to people for ten days and select for the few bacteria that were hip to the new synthetic chemical, eventually three quarters of the cyclamate consumed is metabolized by the bacteria into another new compound called cyclohexylamine. Stop eating it, however, and those bacteria die back. Unfortunately, cyclohexylamine may be toxic and so was banned by the FDA in 1969. In a vintage Kool-Aid ad from 1969, Pre-Sweetened Kool-Aid was taken “off your grocer’s shelves,” but Regular Kool-Aid “has no cyclamates” and “is completely safe for your entire family.”

But, if you just ate cyclamate once in a while, it wouldn’t turn into cyclohexylamine because you wouldn’t have fed and fostered the gut flora specialized to do so. The same thing happens with TMAO. Those who just eat red meat, eggs, or seafood once in a while would presumably make very little of the toxin because they hadn’t been cultivating the bacteria that produce it.

Here’s the link to my video on TMAO: Carnitine, Choline, Cancer, and Cholesterol: The TMAO Connection. For an update on TMAO, see How Our Gut Bacteria Can Use Eggs to Accelerate Cancer, Egg Industry Response to Choline and TMAO, and How to Reduce Your TMAO Levels.

Interested in more on keeping our gut bugs happy? See:

The Effects of Nutritional Yeast for Cancer