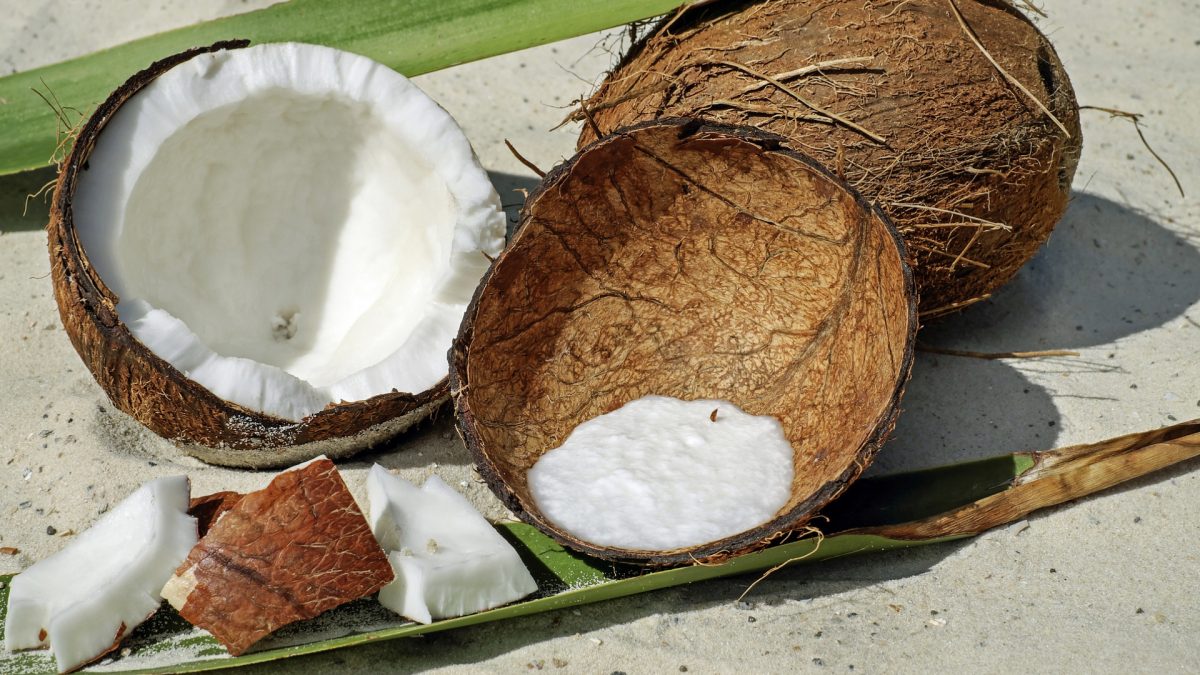 Do the medium-chain triglycerides in coconut oil and the fiber in flaked coconut counteract the negative effects on cholesterol and artery function?

Studies of populations who eat a lot of coconuts are “frequently cited” by those who sell coconut oil “as evidence that coconut oil does not have negative effects on cardiovascular health.” For example, there was an apparent absence of stroke and heart disease on the island of Kativa in Papua New Guinea. What were they eating? Their diets centered around tubers, like sweet potatoes, with fruits, greens, nuts, corn, and beans. Although they ate fish a few times a week, they were eating a largely whole food plant-based diet. It’s no wonder they may have had such low rates of artery disease. And, one of the whole foods they were eating was coconut, not coconut oil.

Now, if you go to Pukapuka, even more coconuts are eaten. In fact, as you can see at 0:51 in my video What About Coconuts, Coconut Milk, and Coconut Oil MCTs?, there’s even an island where coconuts make up most of what people eat—and they do get high cholesterol. How can a population eating 87 percent plant-based, with no dairy and only rare consumption of red meat, chicken, and eggs, have cholesterol levels over 200? Well, they’re eating all those coconuts every day. What are their disease rates like? We don’t know. There are no clinical surveys, no epidemiological death data, and no autopsies. Some EKGs were taken, which can sometimes pick up evidence of past heart attacks, but they found few abnormalities. The sample was too small to be a definitive study, though. And, even if they did have low disease rates, they weren’t eating coconut oil—they were eating coconut in its whole form.

Coconut oil proponents pointing to these studies is like the high fructose corn syrup lobby pointing to studies of healthy populations who eat corn on the cob or the sugar industry pointing to studies on fruit consumption and saying you can eat all the refined sugar you want. But fruit has fiber and so do coconuts. Just as adding psyllium fiber (Metamucil) to coconut oil can help blunt the adverse effects on cholesterol, fiber derived from defatted coconut itself can reduce cholesterol levels as much as oat bran. What’s more, the plant protein in coconuts, which is also missing from the oil, may help explain why whole coconuts may not have the same effects on cholesterol. Although coconut fat in the form of powdered coconut milk may not have the same effects on cholesterol as coconut oil, frequent consumption, defined as three or more times a week, has been associated with increased risk of vascular disease, stroke, and heart disease. And, no wonder, as coconut milk may acutely impair artery function as badly as a sausage and egg McMuffin.

Researchers tested three different meals including a Western high-fat meal that “consisted of an Egg McMuffin®, Sausage McMuffin®, 2 hash brown patties and a non-caffeinated beverage (McDonald’s Corporation)” a local high-fat meal, and an “isocaloric low-fat meal.” The study was conducted in Singapore, so the more traditional local high-fat meal was rice cooked in coconut milk and served with anchovies and an egg. These two different high-fat meals were put up against the same amount of calories in an unhealthy low-fat meal of Frosted Flakes, skim milk, and juice. At 3:21 in my video, you can see the artery function—that is, its ability to relax normally—before and after eating each of the three meals. Researchers found that artery function is significantly crippled within hours of consuming the McMuffins and also the local high-fat meal with coconut milk. So, whether the fat is mostly from meat and oil or from coconut milk, the arteries clamped down similarly, whereas that horrible sugary breakfast had no bad effect on artery function. Why? Because as terrible as the Frosted Flakes meal was, it had no saturated fat at all. (It also didn’t have contain any eggs, so that might have helped, too.)

It’s actually quite “a common misconception” that the saturated fat in coconut oil is comprised of mainly MCTs. Actually, as we discussed, coconut oil is mainly lauric and myristic, both of which have potent bad LDL cholesterol-raising effects. “Coconut oil should therefore not be advised for people who should or want to reduce their risk of CHD,” coronary heart disease, which is the number-one killer of U.S. men and women. The beef industry, for example, loves to argue that beef fat contains stearic acid, a type of saturated fat that doesn’t raise cholesterol. Yes, but it also has palmitic and myristic acids that, like lauric acid, do raise cholesterol, as you can see at 5:12 in my video.

If you compare the effects of different saturated fats, as you can see at 5:29 in my video, stearic acid does have a neutral effect on LDL, but palmitic, myristic, and lauric acids shoot it up—and, frankly, so may MCT oil itself, as it bumps up LDL 15 percent compared to control. Bottom line? “Popular belief”—spread by the coconut oil industry—“holds that coconut oil is healthy, a notion not supported by scientific data.” The science just doesn’t support it.

So, basically, “coconut oil should be viewed no differently” from animal sources of dietary saturated fat. A recent review published in the Journal of the American College of Cardiology put it even more simply in its recommendations for patients. When it comes to coconut oil, “avoid.”

Isn’t coconut oil supposed to be good for Alzheimer’s, though? See my video Does Coconut Oil Cure Alzheimer’s?

If you want to learn more about the original McMuffin artery studies, see The Leaky Gut Theory of Why Animal Products Cause Inflammation.

You may also be interested in Flashback Friday: Coconut Oil and Abdominal Fat.