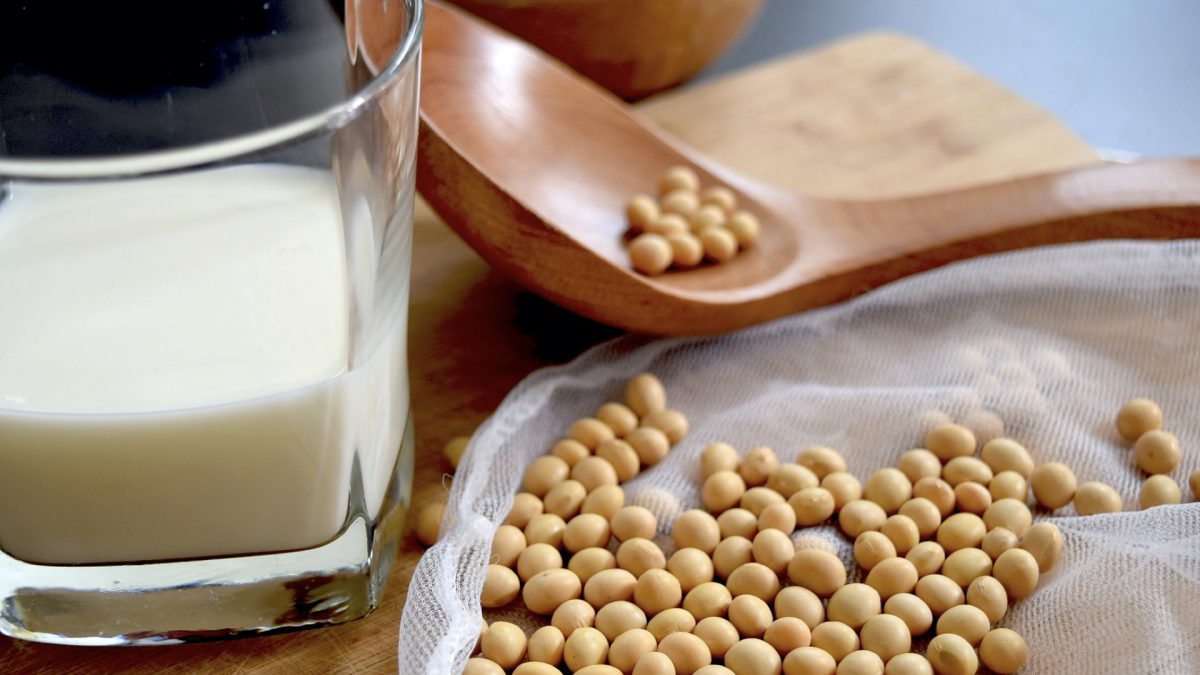 The vast majority of breast cancers start out hormone-dependent, where estradiol, the primary human estrogen, “plays a crucial role in their breast cancer development and progression.” That’s one of the reasons why soy food consumption appears so protective against breast cancer: Soy phytoestrogens, like genistein, act as estrogen-blockers and block the binding of estrogens, such as estradiol, to breast cancer cells, as you can see at 0:24 in my video How to Block Breast Cancer’s Estrogen-Producing Enzymes.

Wait a second. The majority of breast cancers occur after menopause when the ovaries have stopped producing estrogen. What’s the point of eating estrogen-blockers if there’s no estrogen to block? It turns out that breast cancer tumors produce their own estrogen from scratch to fuel their own growth.

As you can see at 1:03 in my video, “estrogens may be formed in breast tumors by two pathways, namely the aromatase pathway and sulfatase pathway.” The breast cancer takes cholesterol and produces its own estrogen using either the aromatase enzyme or two hydroxysteroid dehydrogenase enzymes.

So, there are two ways to stop breast cancer. One is to use anti-estrogens—that is, estrogen-blockers—like the soy phytoestrogens or the anti-estrogen drug tamoxifen. “However, another way to block estradiol is by using anti-enzymes” to prevent the breast cancer from making all the estrogen in the first place. And, indeed, there are a variety of anti-aromatase drugs in current use. In fact, inhibiting the estrogen production has been shown to be more effective than just trying to block the effects of the estrogen, “suggesting that the inhibition of estrogen synthesis is clinically very important for the treatment of estrogen-dependent breast cancer.”

It turns out that soy phytoestrogens can do both.

Using ovary cells taken from women undergoing in vitro fertilization, soy phytoestrogens were found to reduce the expression of the aromatase enzyme. What about in breast cancer cells, though? This occurred in breast cancer cells, too, and not only was aromatase activity suppressed, but that of the other estrogen-producing enzyme, as well. But this was in a petri dish. Does soy also suppress estrogen production in people?

Well, as you can see at 2:34 in my video, circulating estrogen levels appear significantly lower in Japanese women than Caucasian American women, and Japan does have the highest per-capita soy food consumption, but you can’t know it’s the soy until you put it to the test. Japanese women were randomized to add soy milk to their diet or not for a few months. Estrogen levels successfully dropped about a quarter in the soy milk supplemented group. Interestingly, as you can see at 3:04 in my video, when the researchers tried the same experiment in men, they got similar results: a significant drop in female hormone levels, with no change in testosterone levels.

These results, though, are in Japanese men and women who were already consuming soy in their baseline diet. So, the study was really just looking at higher versus lower soy intake. What happens if you give soy milk to women in Texas? As you can see at 3:29 in my video, circulating estrogen levels were cut in half. Since increased estrogen levels are “markers for high risk for breast cancer,” the effectiveness of soy in reducing estrogen levels may help explain why Chinese and Japanese women have such low rates of breast cancer. What’s truly remarkable is that estrogen levels stayed down for a month or two even after the subjects stopped drinking soy milk, which suggests you don’t have to consume soy every day to have the cancer protective benefit.

What about if you already have breast cancer? In that case, see Is Soy Healthy for Breast Cancer Survivors?

And what about GMO soy? Get the facts in GMO Soy and Breast Cancer.

Okay, then, Who Shouldn’t Eat Soy? Watch my video and find out.

What else can we do to decrease breast cancer risk? See: