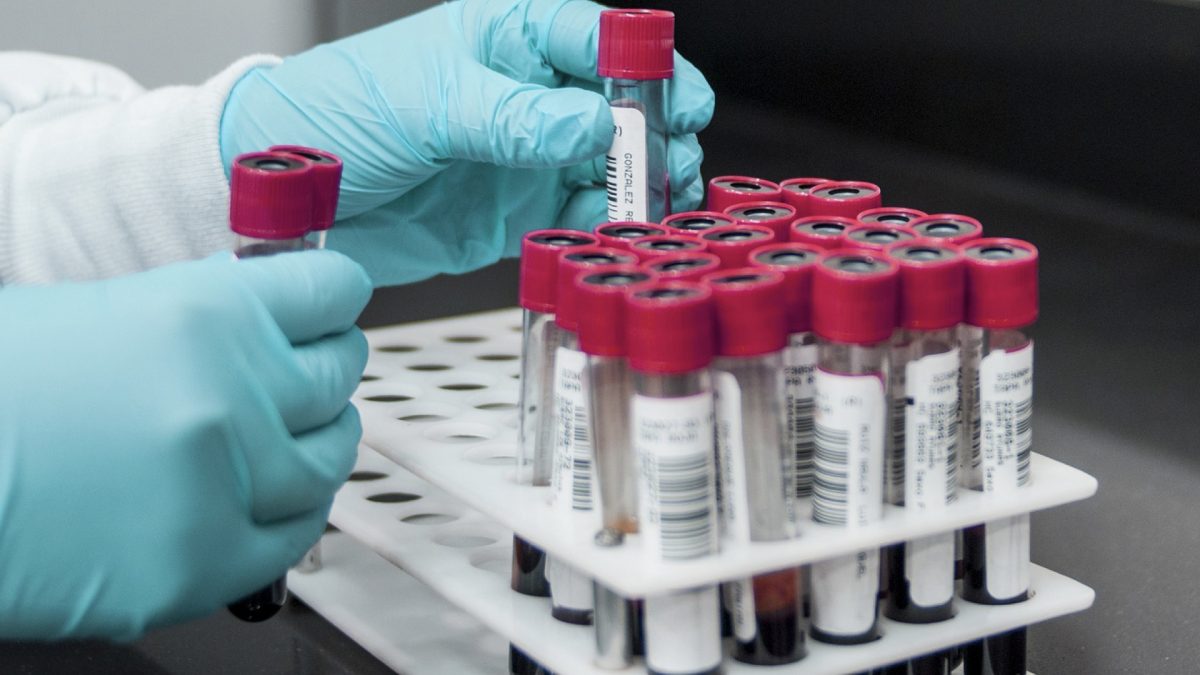 The lead trapped in our skeleton can leach back into our bloodstream when we temporarily or permanently lose bone due to pregnancy, weight loss, menopause, or osteoporosis.

The half-life of lead in the bloodstream is only about a month. In other words, if you feed people lead for about a hundred days to boost up their blood levels and then you stop giving them lead, the levels in their blood starts to drop, such that within about 30 days, their lead levels are cut in half. In another month, they’re cut in half again. So, by around three months, their body is able to remove about 90 percent from their bloodstream. You can see a graphic depicting this at 0:10 in my video The Rise in Blood Lead Levels in Pregnancy and Menopause.

If you’re chronically exposed to lead, however, you can have chronically high lead levels in your blood. More than half a million kids in the United States have concerningly high lead levels, and “poor people…in politically disempowered communities of color are most at risk of lead poisoning,” regardless of age.

If you don’t live in those communities and are not constantly exposed to lead, why should you care about dietary strategies to lower the lead level in your own blood, if your body is already so good at it? Even if you do get exposed to lead here and there, about 90 percent of the lead in your blood is gone after just three or four months. Ah, but gone where?

More than 90 percent of lead in our body “is stored in our bone where it has a half-life of years to decades,” so instead of it taking a few months to get rid of it, how about a few decades? Indeed, researchers estimate the half-life of the tibia, commonly known as shinbone, to be 48.6 years. So, even if we moved to some other planet and never had any further exposure to external sources of lead, we still have an internal source of lead leaching the toxic heavy metal into our system throughout our life.

Okay, but if it’s mostly just stored in our skeleton, what’s the big deal? Well, if you were to lose bone, all the trapped lead could come flooding back into your system. For example, when we lose weight, we lose bone, which makes a lot of sense. Heavier people have a heavier skeleton with greater bone mineral density. Their body has to maintain stronger bones to carry around all that extra weight. So, if we lose weight, do the levels of lead in our bloodstream go up as our skeleton downsizes? As you can see at 2:14 in my video, the answer, unfortunately, is yes—but only if we lose a lot of weight. If you lose 10 pounds or so, not much happens, but if you lose more like 80 pounds, the lead levels in your blood can rise 250 percent.

When else can you experience bone loss? With osteoporosis, obviously. As you can see at 2:31 in my video, women with osteoporosis can lose an average of 3 percent of their bone mass a year. However, even healthy, postmenopausal women without osteoporosis may lose a percentage of their skeleton annually. So, do the lead levels in women go up when they lose their periods? Apparently so. A study of nearly 3,000 women found “a highly significant increase” in lead levels after menopause, which “provides evidence that bone lead is in fact mobilized into blood…A major implication of this finding is that even low level lead exposure, over a relatively long time, may result in increased body burdens of lead which would be releasable in toxicologically significant amounts during critical physiological states” where bone is in flux. So, it’s not just osteoporosis, but, most seriously, during pregnancy and lactation.

Most of the calcium the baby gets in utero comes from “increased maternal absorption” of dietary calcium. The mother’s gut starts absorbing 60 or 70 percent more calcium in the second and third trimesters to build the baby’s skeleton. That’s why women’s dietary calcium requirements are not increased by pregnancy or breastfeeding. Your body’s not stupid. When it realizes it needs more calcium, it just absorbs more calcium. Now, when that isn’t enough, you do end up dipping into the calcium stored in your bones. That isn’t a problem, though, because after it’s all over, your body puts the calcium back into your skeleton, such that six months after delivery, after giving birth, your bone mineral density is right back where you started.

That’s why, as you can see at 4:10 in my video, even those women who breastfeed for a long time, well past those six months after giving birth and having had multiple pregnancies, end up with no compromise to their bone mineral density later in life, whether measured in their wrists, spine, or hips. So, why does it matter if your body makes a withdrawal from the bone bank during pregnancy and lactation, if it ends up just depositing it all back? Because of the lead. When your body dissolves some of your bone to borrow that extra calcium, it releases the lead that had been locked in the skeleton at the worst possible moment—right when your baby is most vulnerable. That is part of “lead’s toxic legacy.”

What can we do about it? You can find out in my video Should Pregnant Women Take Calcium Supplements to Lower Lead Levels?.

To see my other videos on lead, check out: