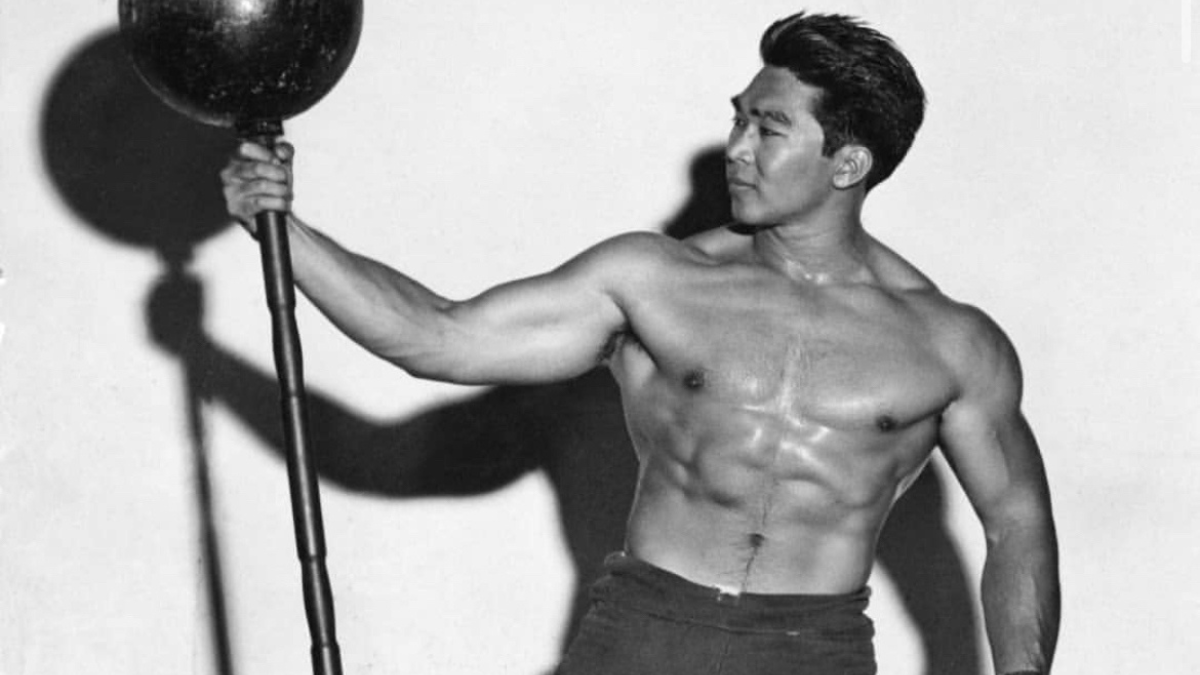 Kono rose from truly humble beginnings to become one of the United States’ most triumphant athletes. From his contemporaries to big names such as Arnold Schwarzenegger, Kono was regarded as a highly inspirational figure in American athletics. (1)(2) Fellow Team USA athlete and Olympic medalist Pete George called Kono “the greatest weightlifter of all time.” (3)

In 2005,  the International Weightlifting Federation (IWF) dubbed Kono “Lifter of the Century.” (4) What makes these accolades all the more impressive is that Kono came to the sport of weightlifting not through an air-conditioned gymnasium, but in an internment camp during World War II.

His larger-than-life story wouldn’t be out of place on the silver screen, but sometimes reality is more extraordinary than fiction.

Many of the greatest strength athletes in history are defined by a singular trait — resolve. (5) Born to parents of Japanese descent in Sacramento in 1930, Kono was far from a healthy child. Prior to the age of 11, he suffered terribly from asthma and, because of this, was often absent from school.

At times, he was even too debilitated to participate in physical education class. (6) At 11 years old, Kono was 4’8″ and weighed only 74 pounds. (7)

His health and stature would eventually improve, but under strained circumstances. Following the terror of the Pearl Harbor attack in December of 1941, scores of Asian-Americans were rounded up and interned in camps across the United States. Kono and his family were among those imprisoned.

At the Tule Lake internment camp in 1942, Kono was introduced to the barbell as part of the detainees’ attempts to grapple with the monotony and dread of imprisonment. (8) Despite his father’s reservations, Kono began training several times per week with several boys his age. One of whom, Emerick Ishikawa, would also go on to compete for the United States in the 1948 Games. (9)

[Related: Five of the Greatest Weightlifting Battles of All Time]

When his family left the camp in 1945, Kono returned to Sacramento where he joined a local gym to continue pursuing weightlifting. In 1948, while Ishikawa was at the London Olympics, Kono placed second in the welterweight division at an American Athletics Union (AAU) weightlifting meet. The following year, he won the California State Championship. By 1950, he had broken four state records.

Kono quickly established a reputation for his impressive levels of strength, despite still being somewhat small in stature, and began to train at more and more reputable facilities. (10)(11)

In 1950, fitness magnate and owner of York Barbell Bob Hoffman was hard at work collecting many of the best weightlifters in the United States. Kono had tried out for the 1950 IWF World Championships at the York gym and was seemingly poised for a full-time career in sport.

However, he was drafted into the Korean War and stationed at Fort Mason, California, as a military fitness instructor, and missed out on international team selection. (12)

A Champion of the World

In 1952, Kono traveled to the Helsinki Olympics where he won his first Olympic gold medal — despite battling both fierce competition and a nasty bout of food poisoning the evening prior. (13)

The following year, buoyed by his success, Kono was discharged from the military, thereby allowing him to truly dedicate himself to his sport. From 1953 to 1959, Kono won gold medals across six consecutive Weightlifting World Championships and multiple weight categories and set new World Records in every division he partook in.

Kono’s athletic prowess stretched beyond the sport of weightlifting. In 1953, he won the Mr. Sacramento bodybuilding competition, which set off a string of successes in physique shows, culminating in a win at the Fédération Internationale Haltérophile et Culturiste (FIHC) Mr. World contest, and its coveted Mr. Universe title in 1954 (lightweight) 1955, 1957, and 1961 (overall). (14)

[Related: Bodybuilding for Beginners — Your Guide to Getting Started]

After a brief stint away from the sport, Kono returned to Olympic lifting in 1956 at the Melbourne Olympic Games. Weighing in as a “light-heavyweight”, two full divisions above his prior appearance on the competition platform, Kono again bagged a gold medal and set a new World Record in the Total.

Despite his hiatus, Kono was regarded still as one of the fiercest competitors in the international circuit. Fyodor Bogdanovsky, a Soviet Union athlete who often competed against him directly, said of Kono’s demeanor in competition:

“When Kono looks at me from the wings he works on me like a python on a rabbit.” (15)

Kono was imperious at international competitions and held the respect of his peers. Much of which Kono attributed to his devout practice of Buddhist philosophy and stoic approach to the mental rigors of athletics. To Kono, the mental component of weightlifting was as important as (if not more than) its physicality. (16)(17)

After a long string of successes, disaster befell Kono at the 1959 World Championships in Warsaw, Poland, where he injured his knee while attempting to perform a new World Record in the clean & jerk.

Despite extensive rehabilitation and recovery practices, at the 1960 Olympic Games, Kono suffered his first defeat in eight years at the hands of Soviet weightlifter Alexandar Kurinov. True to his personal philosophy, Kono remarked that he had to lose a battle eventually. (18)

However, Kono would not close his career on a loss. At the 1961 Prix de Moscow Tournament, Kono set new light heavyweight World Records in both the overhead press and Total. The final capstone to his monumentous career was a gold-medal performance at the 1963 Pan-American Games. All in all, Kono claimed 26 individual World Records and 7 Olympic Records.

The “Elder Statesman” of Weightlifting

After hanging up his weightlifting belt in 1965, Kono dedicated himself to coaching other athletes, something that he had spent much of his free time doing since as early as 1952. (18) While he did not possess formal accreditation or an educational degree, Kono’s reputation, resume, and passion for the sport served him well as a teacher.

From 1966 to 1968, Kono coached for the Mexican weightlifting team while also contributing as a writer and columnist for Bob Hoffman’s famous Strength & Health magazine.

Although Mexico was not regarded as a weightlifting powerhouse in the 20th century, Kono took his position seriously. Notably, he was able to coach bantamweight lifter Manuel Mateos to a new Junior World Record in the overhead press at the 1967 Pan-American Games.

Following his time in Mexico, Kono expanded his reach beyond the Atlantic ocean and took a position coaching for the West German weightlifting team — a job that wasn’t as financially lucrative, but came with much more prestige and potential.

At the time, West Germany was an underdog in the European circuit, far behind the likes of the Soviet Union or Bulgaria. Kono, however, helped rocket the country to medal-winning successes internationally during his tenure there.

In 1976, Kono once again returned to stateside coaching as he joined up with Team USA for the 1976 Olympic Games. One of his most famous athletes, Bruce Wilhelm, failed to secure a podium position in Montreal but would go on to win the World’s Strongest Man competition two times.

Regardless, Kono added a final notch to his coaching belt thanks to a silver-medal-winning performance from Lee James at the 1976 Games.

Post-1976, Kono devoted himself almost exclusively to being an educator, author, and public figure in the sport of weightlifting. He did, however, have one last go-round as a competition coach from 1987 to 1989 when he served as a women’s coach for Team USA at the World Weightlifting Championships.

At the time, women in weightlifting were a relatively new but burgeoning phenomenon — female weightlifting didn’t have its own event at the Olympic Games until 2000. Regardless, sports biographer and writer John Fair noted in a retrospective on Kono that during a time in which women were viewed as improper in weightlifting, Kono treated his athletes both respectfully and fairly. (18)

[Related: The Most Aesthetic Bodybuilders of All Time]

Kono was also something of an entrepreneur in sports. Prior to his retirement, he in 1964 helped design and create several prominent athletic products such as protective knee equipment. As a homage to York’s Bob Hoffman, Kono called his protective kneewear “Bob Hoffman knee bands” and the product went on to sell over half a million units in 1972. (18)

Moreover, during his time coaching for West Germany, Kono teamed up with Adidas to help develop a different style of weightlifting shoe. At the time, most lifting shoes — also called “boots” — were high-topped, with lacing systems that extended up the shin well past the ankle.

Kono noticed that this was restrictive to an athlete’s ankle mobility, which was crucial for maintaining an upright posture in exercises like the clean or front squat. As such, Kono took inspiration from the shoes utilized by Soviet athletes and helped draft up a low-top shoe that was, at the time, a huge advancement.

According to John Fair, when Kono returned to the United States in 1970, he brought several pairs of his new innovation with him, which were quickly snatched up by hungry athletes and coaches. (18) L0w-top lifting shoes with more freedom of movement at the ankle have since grown to be the default style for the sport.

A Life of Luster

Tommy Kono is America’s greatest weightlifter, bar none. The conversation surrounding the proverbial “GOAT” is often contentious and never fully resolved, but few athletes living or dead in any sport (strength-focused or otherwise) can claim to have lived as rich of a life as Kono.

From the dregs of imprisonment to the highest echelons of international athletics, Kono turned his tumultuous and strife-filled upbringing into a story of triumph and compassion. That he was a laser-sharp and extraordinarily strong weightlifter (and a mighty bodybuilder in his own right) merely adds to his case. It’s a rare thing to see an athlete succeed for so long, by such a margin, across so many weight categories and physical pursuits.

Kono’s legacy goes far beyond his (admittedly extensive) medal cabinet, though. From athlete, to entrepreneur, to advisor, Kono touched the lives of thousands both in the United States and abroad. The esteem with which he is spoken about resonates to this day as a testament to his profound impact on weightlifting.

Kono passed away quietly in 2016, but his successes and reputation will endure as long as there are record books in which to pen his story.