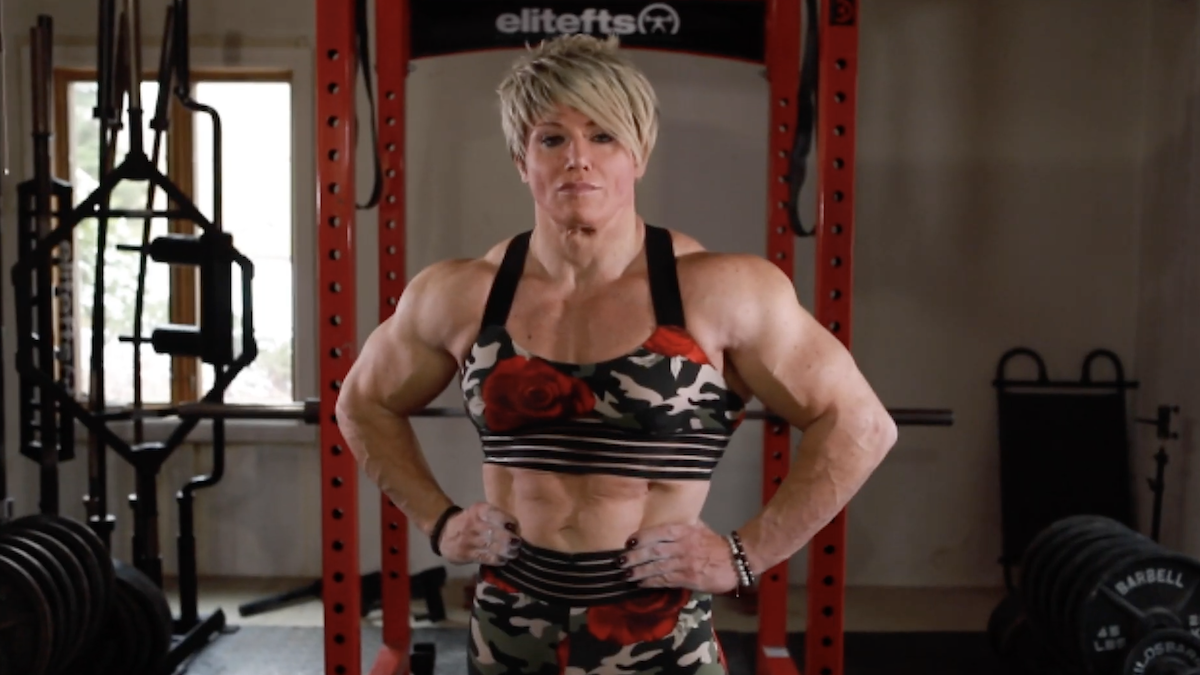 Powerlifters and bodybuilders — athletes across strength sports, really — have been struggling with the lack of competition and in person camaraderie during the Coronavirus pandemic. That loss has been tough on many folks’ mental health. As strength athletes, we plan our goals and dreams around the cycles of increased joy, excitement, and community that come with meets.

But during any old year — not just the dystopia that has been 2020 — trans and nonbinary powerlifters and bodybuilders usually have no competitions to look forward to. The International Association of Trans Bodybuilders and Powerlifters (IATBP) is trying to change that.

Editor’s note: This article is an op-ed. The views expressed herein and in the video are the author’s and don’t necessarily reflect the views of BarBend. Claims, assertions, opinions, and quotes have been sourced exclusively by the author.

Trans Bodybuilding and Powerlifting in the U.S.

“The first historical Trans Bodybuilding competition was held in 2014 at the conference then called FTM FitCon,” says Bucky Motter, the executive director of IATBP and a veteran of the Gay Games. He tells BarBend:

This event was the first of its kind worldwide.

As it grew more inclusive of various trans identities, the event gradually became TransFitCon, then the International Association of Trans Bodybuilding in 2018. The organization added the ‘P’ for powerlifting by the following year.

Fun fact: 2018 was the year I headed down to Atlanta to compete in IATBP’s powerlifting meet. I’d long since resigned myself to the idea that I would never be able to compete — how does a nonbinary trans guy like me compete when everything about the sport is so aggressively split into categories for cis men and cis women? When I found IATB, I found a piece of home.

According to Motter, that’s exactly what IATBP wants to do for trans and nonbinary lifters:

“Each year we put on a world-class event where no one has to compete ‘stealth’ (keeping their trans identity private) as some do in other organizations. No one is turned away because of their hormone replacement therapy (HRT) status. No one is turned away from our bodybuilding contest if they haven’t had chest surgery. We also have an infrastructure set up so that anyone who wants to host a competition and meet can do so with our support.”

During 2020, that in-person infrastructure has fallen apart for pretty much every federation or lifting organization — but that doesn’t mean IATBP isn’t still working to form community for trans and nonbinary lifters. In lieu of their annual powerlifting and bodybuilding meet, the only transgender association of its kind in the U.S. is hosting a virtual conference on October 3.

That conference — “Voices in Trans Bodybuilding and Powerlifting” — is free for all attendees, and promises to bring a sense of community to lifters who too often aren’t allowed to participate in officially-sanctioned events. This event will help keep the trans and nonbinary lifting community together, even while the pandemic is keeping people physically apart.

First things first if you’re new to the lingo: trans folks don’t identify with the gender they were assigned at birth. For example, trans women were assigned male at birth but are women.

Cisgender folks do identify with the gender they were assigned at birth (so, the doctor might have said “it’s a girl” and you go through life like, “yep, I’m a girl!”). People who are nonbinary don’t necessarily identify with either of the two binary genders (man or woman).

Why does all this matter in strength sports?

Think about the last meet you went to — different weight classes and different gender categories determine who wins, who does well or not well, and… who is allowed to compete.

In 2019, USA Powerlifting (USAPL) banned transgender athletes from competing in their meets, and there is only a small handful of lifting federations in the U.S. that allow trans athletes to compete. The argument to justify banning trans athletes often centers itself on “fairness,” stirring up fear that trans women in particular will dominate women’s lifting — by claiming that trans women are “really men.” And that… is simply untrue.

Trans women are women. It’s not women that’s the problem, it’s the standards we use to separate and categorize bodies. Trans women athletes do not have unfair advantages against other women to begin with — “unfairness” just distracts from the real transphobia and misogyny at work in the statement that people assigned male at birth are “naturally” better athletes than people assigned female at birth.

To break it down into schoolyard terms: if you strictly follow the logic, people who want to ban trans women from competing with other women are also technically stating that cis women are “weaker” than cis men… It’s just less popular to say it that way, so it’s baked into transphobic scare tactics instead.

Every individual has body differences — weight, limb length, overall build, and yes, hormone levels. For most athletes, those differences are interesting tidbits to talk about while commentating on meets, not something to ban an athlete for. For example, powerlifters with builds that are more conducive to benching aren’t excluded from powerlifting meets on the grounds that it’s unfair for them to compete with longer-armed athletes.

For another, more pointed example, organizations like the USAPL seem more actively interested in banning trans women than trans men with the argument that it’s not fair to cis women to compete with people whose bodies were assigned male at birth. Many trans guys do want the chance to compete with other men, but the mere prospect can be terrifying.

“Although I competed prior to transitioning, competing as a male against cisgender males was a different world, requiring a new level of confidence within myself,” says bodybuilder Paulo Bautista, who is one of the speakers at IATBP’s  virtual 2020 event.

“My lifestyle of lifting became more of a daily ritual with new challenges. It has literally taken 16 years for me to finally feel confident to be able to step on stage again.”

If genuine “fairness” were truly a concern, federations would also be actively concerned with trying to figure out how to level the playing field for trans men, making sure men’s competitions are welcoming and non-exclusionary. “It might not fair to trans men,” the argument would go, “to compete against cis men because cis men have a ‘biological advantage’ from birth.”

Now, that’s a terrible argument, too — it’s saying that cis men are “naturally” better athletes than cis women, and do we really want to be that blatantly misogynist? That’s not how the argument ever goes, anyway, because the debate is always about fear that trans women will succeed and cis women will not — it’s about preserving cis privilege and policing people’s bodies and identities, not about preserving true fairness for all athletes.

True fairness for trans athletes involves simply letting us compete in categories that match our identities. Bodybuilding, Batista tells BarBend, helped him develop a healthier relationship with his body after experiencing bulimia and body dysmorphia disorder in his early 20s. Lifting and competing helps so many lifters’ mental health, of course — and trans, nonbinary, and intersex folks deserve to access the same affirmations and competitions that our cis peers do.

There are different weight classes to account for people’s body differences — why should hormone levels be any different, especially when it’s part of someone’s medical treatment as it is for many trans and nonbinary folks?

According to record-holding powerlifter Janae Marie Kroc, the IATBP conference on October 3 will feature the unveiling of new ideas about how to center genuine fairness in powerlifting and bodybuilding categories in a way that seeks to be inclusive of all genders rather than automatically rejecting trans people.

“I won’t give everything away (you’ll have to tune into the conference to learn about everything we’re trying to do),” she tells BarBend, “but essentially we are hoping to create a competitive environment for trans, nonbinary, and gender non-conforming powerlifters and bodybuilders where everyone feels represented and has a place to compete that is safe and welcoming.”

Nat Veiga, IATBP’s social media chair, is working with Kroc and others at IATBP to bring this vision to life. Veiga says that IATBP is advancing trans and nonbinary athletes’ innovations in reshaping the conversation about “fairness” in sport to be inclusive rather than automatically exclusive — protecting “fairness” only for some, while projecting transphobia onto those being excluded.

“We as an organization are doing something somewhat unprecedented in creating divisions for athletes that are not only inclusive and affirming to all lifters regardless of gender, but also fair and competitive. I think everyone in the community has their own ideas on how this should be done, but everyone’s theories may not validate and affirm others, or allow for genuinely fair competition. We have a survey where we are taking input from current, future, and potential competitors to inform not only our session but also how we end up hopefully remaking the divisions in future competitions.”

Why does all of that matter?

No matter your gender, if you’re a lifter, you know that feeling of community when you roll into the gym — that feeling of empowerment and confidence when you step onto the platform. Sure, there’s way fewer in-person meets this year because of COVID-19 safety issues, but the IATBP intends to give lifters just that, no matter where you live or what else is going on in the world. Kroc says further:

“Unfortunately, being a transfeminine individual (I identify as trans, nonbinary, and gender fluid) and existing in a patriarchal society where we are taught only men are strong and being big and muscular is not ‘lady-like’ put me at odds with my gender. I grew up knowing very little about other trans women and the handful that I was aware of seemed to be nothing like me. It wasn’t until after I came out and became close friends with other female strength athletes did I finally realize that a desire for strength has nothing to do with gender and there are a great number of women that feel exactly like I do about strength training.”

IATBP is an organization that promises to bring together many folks of all genders who feel similarly about strength training — and aren’t strength sports supposed to create that kind of affirmative community, anyway?

Don’t Miss Out On IATBP’s Work

“Nowadays, being non-binary is a blessing,” Veiga says in the lead-up to IATBP’s 2020 virtual event.

“It means I wake up every day being 100% sure of who I am, because I have no other option. It means every day is about learning to love and respect myself, and then getting better at expressing that towards others. Being non-binary isn’t the only thing about me or the only thing that defines me, but it means everything to me.”

This is also pretty much exactly how I feel about both my gender and about lifting — when you get involved in IATBP’s offerings yourself, you might find yourself feeling similarly.

Is more testing behind the record numbers of COVID-19 cases in Canada? Your testing questions answered

Deaf blind woman’s rights breached by how her student loan was administered: court