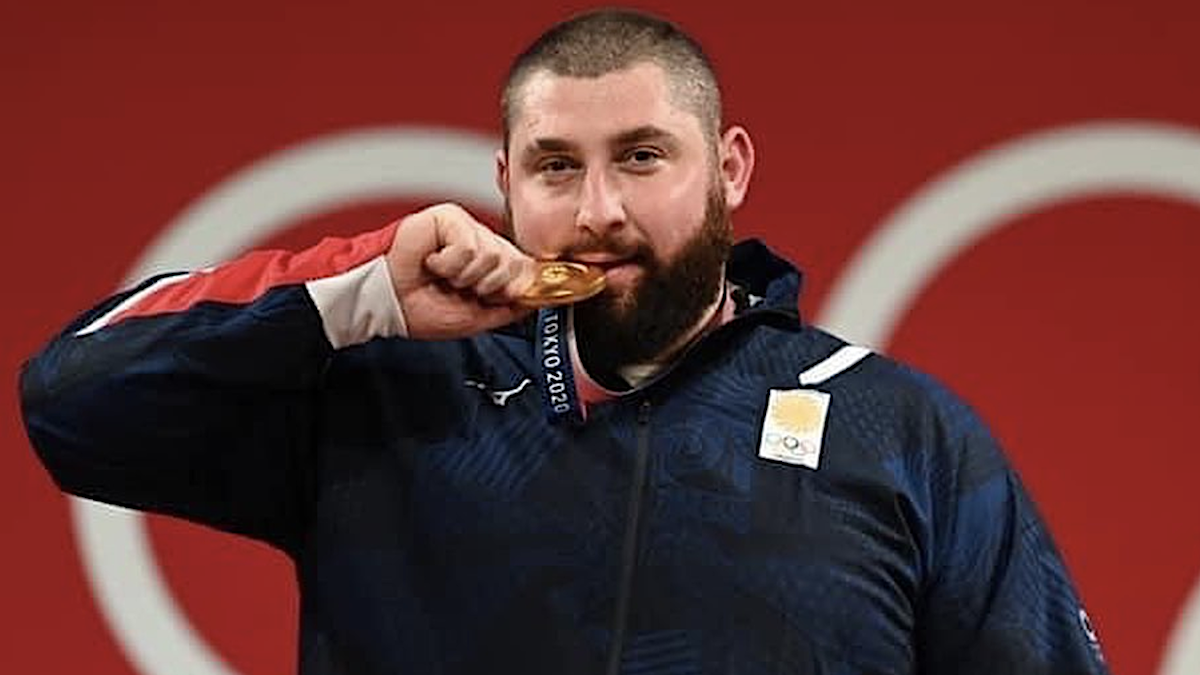 At the rescheduled 2020 Tokyo Olympic Games, Georgia’s Lasha Talakhadze broke history by setting three new all-time world records in the +109-kilogram class en route to the second gold medal of his career. Here were his full stats from the Games:

There was little doubt that Talakhadze would perform spectacularly at the Games and his six-for-six outing lived up to the hype. His seemingly effortless victory was so impressive that it caught the eye of strongman Laurence “Big Loz” Shahlaei, who took to his YouTube channel to congratulate Talakhadze and suggest a potential pivot into strongman. He believes Talakhadze would fare quite well against the World’s Strongest Men. Check it out:

Shahlaei has previously shared what he believes are the five requirements that make a successful strongman. They are:

At age 27, Talakhadze appears to fit each of those requirements soundly.

In an interview with Oleksiy Torokhtiy from May 2020, Talakhadze compared himself not to other weightlifters but his previous totals. He has long sought the legendary — and to this day unattained — 500-kilogram (1,102-pound) milestone total — his Tokyo Games performance was just 12 kilograms (26.5 pounds) shy.

If Talakhadze’s competition results were not evidence enough that he consistently pushes his limits in training, first-hand accounts from his teammates and coach also support the notion. In that same interview with Torokhtiy, Talakhadze’s coach Giorgi Asanidze said, “Lasha really trains often and works very hard.” He compared Talakhadze to himself, saying that even when his trainers would tell him to rest, he wanted to continue working in the gym.

Talakhadze has not publicly shared much about his diet. However, he has spent the entirety of his weightlifting career in the Super Heavyweight division, and his six-foot, four-inch frame weighs just shy of 400 pounds. Those are similar stats to some of the world’s current top strongmen.

In terms of network, Shahlaei notes that Talakhadze actually has a relationship with one of the top strongmen in the world, also from Georgia — Konstantine Janashia. Janashia has been to the WSM Finals on five separate occasions (2016-2019, 2021). He finished in sixth at the 2021 WSM contest but was in contention for the podium heading into the final event. Janashia is a consistent mainstay in elite-level strongman competitions and could certainly provide a network if Talakhadze dipped his toes into the strongman space.

In Shahlaei’s words, Talakhadze “has a legitimate claim to being the strongest man on the planet.” For a sense of how Talakhadze stacks up against the world’s strongest men, he has shared that his heaviest squat was 340 kilograms (749.6 pounds) for three reps. At the 2020 WSM, the squat lift event challenged athletes to max reps of 317.5 kilograms (700 pounds) — JF Caron scored the most with 11 reps.

To compare the deadlift, the 2021 WSM competitors were challenged to pull 344.7 kilograms (760 pounds) for as many reps as possible in one minute — three strongmen scored 10 reps (Adam Bishop, Trey Mitchell, and Caron). Although different movements, Talakhadze has been filmed clean pulling 300-kilogram (661.4-pound) triples and 310-kilogram (683.4-pound) raw singles.

The most apt comparison may be in overhead pressing events. Granted, the clean & jerk and the log lift have some large differences, the most glaring being the implements used. However, they both aim to fixate the heaviest amount of weight possible overhead. In Tokyo, Talakhadze secured 265 kilograms (584.2 pounds) in the clean & jerk — 37 kilograms (81.6 pounds) more than four-time WSM champion Žydrūnas Savickas‘s 228-kilogram  (502.7-pound) log lift world record.

Although it is rare to see a split jerk technique used for the log lift, it has been done. Former American log lift record holder Rob Kearney often used the split jerk to make up for his relatively smaller size — he is one of the rare elite strongmen with a sub-300-pound bodyweight.

Like Shahlaei, strongman Kalle Beck also believes that Talakhadze could transition successfully to strongman. He considers it easier to transition from weightlifting to strongman rather than the other way around due to the “stringent judging” in weightlifting. Beck gives a clear visual to demonstrate this idea:

I’d have an easier time believing Lasha Talakhadze could train to deadlift 500 kilograms than I would Eddie Hall snatching 220 kilograms.

Beck thinks the obstacles for Talakhadze’s hypothetical transition to strongman would not be strength but rather the variety of movements and variations that are commonplace in strongman.

In weightlifting he is a specialist and only needs to do two lifts where in strongman you need to be good at a variety of different events [which are] not standardized.

When it comes to strongman events that reward similar training to the snatch and clean & jerk, Talakhadze could likely do very well in Beck’s eyes. Some examples are the Atlas Stones or other loading events (lifting heavy objects off the floor). There is not, however, much preparation for events like the yoke walk or truck pull in a weightlifter’s training regimen.
The log lift does have similarities as previously mentioned, but Beck notes that the log is much more “awkward” than an Olympic barbell.

It is a lot further out in front of the body from the lifter and it can be harder to generate good leg drive and to stabilize above your head. It generally requires more brute strength than a barbell clean & jerk.

Despite that difference in clunkiness brought on by the change in the instrument, Beck does believe that if Talakhadze trained specifically for the log lift, he could lockout over 500 pounds based on his weightlifting accolades. Talakhadze’s technique would simply “look a lot different than Zydrunas Savickas’s.”

Who’s to say if we will ever get to see Talakhadze try his hand at strongman. He is still very much in the prime of his weightlifting career and could likely step onto the 2024 Paris Olympic Games stage to win a third consecutive gold medal.

The competitive age cap in strongman is much older than many other strength sports — Brian Shaw finished second overall at the 2021 WSM contest at age 39 — so Talakhadze might find strongman more appealing once he decides to close the curtain on his weightlifting career. Regardless, it would be exciting to see the world’s strongest weightlifter battle against the strongest men in the world.