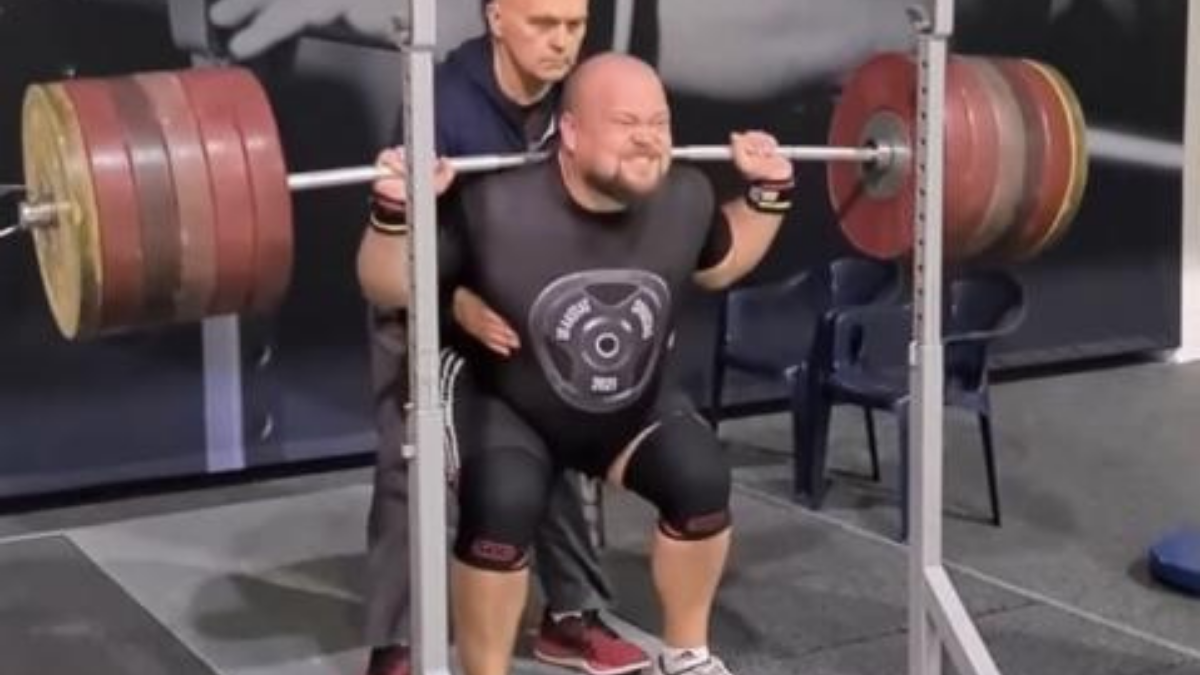 Blink and you’ll miss it. In the training hall of the 2021 World Weightlifting Championships in Tashkent, Uzbekistan, Estonian weightlifter Mart Seim was seen squatting 305 kilograms (672.4 pounds) in about one second, according to an Instagram Story posted by All Things Gym.

On Nov. 12, 2021, a month prior, Seim posted an Instagram video of some of his squat training. In the 12-second clip, Seim can be seen moving with the barbell for roughly six seconds in total, during which time he squats 300 kilograms (661.3 pounds) for three repetitions.

The Estonian powerhouse is known for having some of the strongest legs in Olympic lifting, a case he has no trouble making for himself. You can check out the 300-kilogram triple below — keep a stopwatch at the ready — courtesy of Seim’s personal Instagram account:

[Related: Everything You Need to Know About How to Increase Strength]

Based on the publication date, it is likely that Seim hit this jaw-droppingly-fast triple as part of his preparation for the 2021 World Championships.

Note: Seim weighed in at just over 150 kilograms or 330.6 pounds for this competition.

Although Seim placed 12th in Tashkent in the Men’s +109-kilogram event, he’s not unfamiliar with the weightlifting podium. At the 2015 World Weightlifting Championships, Seim took home the silver overall medal at +105 kilograms. Notably, he clean & jerked 248 kilograms (546.7 pounds) to win the gold in the lift and defeat now two-time Olympic Champion Lasha Talakhadze by one kilogram, though Talakhadze won the overall title. (Talakhadze currently owns all three records at +109 kilograms with a 267-kilogram clean & jerk and 225-kilogram snatch.)

Making 300 kilograms in the back squat look like a warm-up is an easy task for Seim. Throughout his weightlifting career, he’s posted some crazy feats of strength and athleticism — including a truly massive 400-kilogram (881.8-pound) back squat, which is one of the fundamental keys to his power with the bar.

To squat like Seim, you need three things. First, while 300 kilograms is a bar-bending weight on its own, it’s only 75% of 400 kilos, his presumed one-rep-max in the lift. To squat any weight with speed and power, you need a surplus of raw strength in your pocket. It’s nearly impossible to move a weight quickly if it is too close to your strength ceiling.

Second, your squat technique needs to be as impeccably precise as Seim’s. As an Olympic lifter, Seim squats with a high bar position and to maximum depth. By allowing himself to drop into the hole with some degree of momentum, he can rely on the elasticity in his legs and hips to help propel him back up to a standing position. Properly “catching the bounce” in a ballistic squat takes plenty of practice to get right, but can add more than a few extra pounds to the bar.

Finally, you have to put in the work. According to the IWF’s athlete profile on Seim, he’s been active as a competitive weightlifter for nearly a decade and has likely trained for some time prior. While you may not quite aspire to bulldoze six-hundred-plus pounds the way he does, years of dedicated training with the right strength program can help you achieve mastery in any lift — including and especially the squat.

While there are other heavy-hitters in the squat arena — such as Tian Tao, Eishiro Murakami, or Clarence Kennedy — few, if any, modern weightlifters display talent in the squat that rivals Mart Seim.

Squatting three reps in six seconds is no joke, even if you’ve only got one plate on your bar. For Seim to hit such a lift in training with double his body weight solidifies him as one of weightlifting’s best squatters. He may not have had a chance at the podium in Tashkent, but as long as he keeps his quads in fighting shape, no door is closed to him.