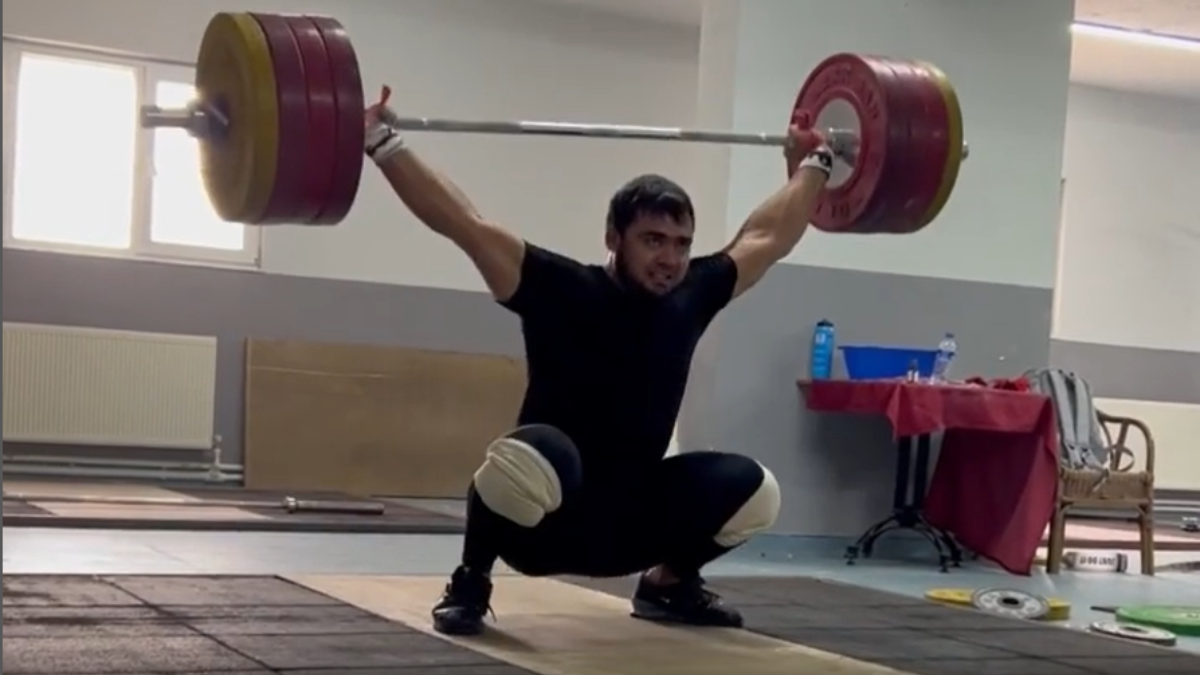 Akbar Djuraev is doing the most. On Jun. 4, 2022, the Tokyo 2020 Olympics gold medalist at 109 kilograms posted a colossal 205-kilogram (451.9-pound) snatch to social media. Not only did Djuraev’s lift exceed his competition best, but it also unofficially advances the current World Record by five full kilograms.

Roughly one week prior, the Uzbek weightlifter also revealed that he had recently crushed an unofficial World Record in the clean & jerk — 245 kilograms, or 540.1 pounds.

The Uzbekistan weightlifting team’s Instagram account showcased an alternate angle of the lift in question, while Djuraev posted a frontal view on his personal page.

Neither Djuraev himself nor the Uzbekistan team account specified when exactly he hit this giant snatch in the gym. However, Djuraev seems to be wearing the same attire as in his clean & jerk video, which may indicate that he smashed his personal bests in both lifts on the same day.

The 22-year-old opted to wear knee sleeves, wrist wraps, and utilized a pair of lifting straps to secure his grip.

What It Means to Snatch 200 Kilograms (or More)

In fixing his barbell overhead, Djuraev has earned himself a seat at one of Olympic lifting’s most exclusive tables. Since the sport’s competition classes were reorganized in 2018, only Yang Zhe of China has been able to secure a 200-kilogram snatch in competition — the heaviest official record by a non-superheavyweight athlete. Zhe made that lift in the spring of 2021.

Prior to 2018, the former heavyweight snatch record (also 200 kilograms) was held by 2008 105-kilogram Olympic Champion Andrei Aramnau of Belarus, who made it at the Beijing Games. That record was unchallenged for an entire decade before the sport remade its weight classes.

Note: Weightlifting has undergone many adjustments to its competition bodyweight categories over the years. Colloquially, “heavyweight” refers to the penultimate class below the super-heavyweight division, which has no cap on how much an athlete can weigh.

Djuraev’s 205-kilogram snatch from the floor places him alongside some of the sport’s most accomplished non-superheavyweight athletes. Dmitry Klokov, Ilya Ilyin, Ruslan Nurudinov, Nicu Vlad, Aleksey Torokhtiy, and Sohrab Moradi are among the few lifters who have snatched 200-plus either from the floor or via one of the lift’s many variations.

Since 1993, no weightlifter in any heavyweight division has logged a valid World Record snatch above 200 kilograms at an international event. However, that longstanding benchmark seems poised to fall in the near future.

The World Record holders in the clean & jerk and Total in the 109-kilogram division — Ruslan Nurudinov of Uzbekistan and Armenia’s Simon Martirosyan, respectively — have both snatched in excess of 190 kilograms multiple times in competition. Current record holder Zhe of China is known for spectacular snatching as well.

However, with this 205-kilogram training lift, Djuraev seems to be well within striking distance of a new World Record. If he can match this weight on the competition platform, he might just bag himself a record that can stand the test of time.