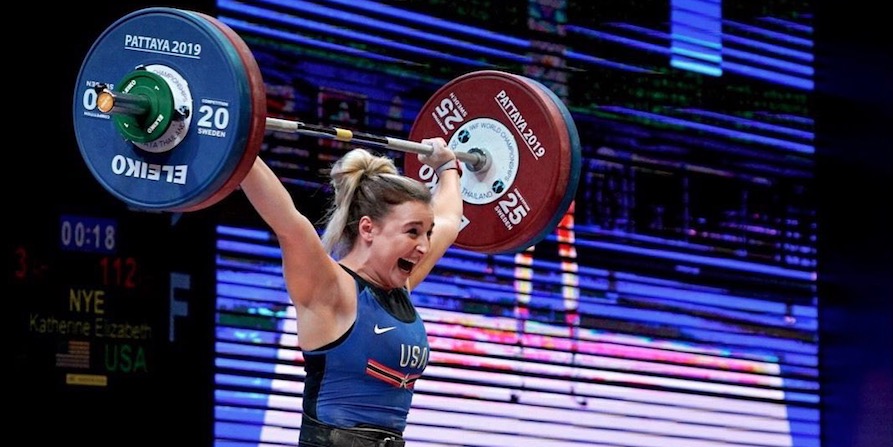 It sometimes seems like all eyes are on Katherine Nye when it comes to women’s weightlifting in the United States, and she’s all but confirmed to be representing the country in Tokyo later this year.

While it remains to be seen if Mattie Rogers, Sarah Robles, Jourdan Delacruz, Mattie Sasser, or Jenny Arthur will be going to the Olympics, USA Weightlifting’s CEO Phil Andrews says that Nye is “reasonably safe” as the first female weightlifter for the U.S.

The 21-year-old deserves the accolades. The youngest World Champion in American weightlifting history, she currently holds every American record in her -71kg weight class with the following lifts:

As part of a collaboration with Reddit and NBC, Nye is one of nineteen athletes running Q&A-style “Ask Me Anything” posts on Reddit as the Olympic approach.

You can read all her answers here, but we’ve compiled our favorites below.

[Related: Our interview where we learn everything there is to know about Katherine Nye’s diet]

“SNATCH! I love the speed, technique, and strength required to excel at this lift. It took a lot of work to even like it, but now there’s no better feeling than hitting a perfect snatch.”

“Everyday is a cheat day for me, I’m bulking to fit into my new Olympic weight category. (Editor’s note: That’s the -76kg class; Nye gained 25 pounds last year.) BUT, my favorite is a nice pasta, preferably with lots of cream and tomatoes 🙂 dessert is always brownie sundae!!”

This is an ad for earbuds, but hey, it’s got some cool lifting shots.

“Bipolar disorder ruled my life for years. It determined if I liked weightlifting or not. If I could sleep or if I’d sleep all day. My moods, my temper, etc.. But since I’ve been medicated, I’ve gotten much better at processing things and keeping my emotions steady.”

“Find a qualified coach and be a coachable athlete. It’s VERY slow at first, but once you get the hang of it, Weightlifting is very addicting. It’s a great sport with a fantastic community, you just need to keep your head down and do the work :)”

On the time Kelly Clarkson called her a bodybuilder, said her 246-Pound snatch was 156 Pounds

“Hahah in situations where interviewers are telling my story and giving my sport publicity, I try just to be thankful for the thoughtfulness. She didn’t have to do a story on me, and she put me on NATIONAL TV. That’s unheard of for a weightlifter. Even though it was a bit disappointing, she got the point across, which I really appreciate.”

Who is the GOAT in women’s weightlifting?

“Deng Wei or Kuo (Hsing-Chun) on the women’s side. What’s really cool is that they’re all active weightlifting! What a time to be alive!”

Her hopes for the future of women’s weightlifting

“I’d like to see Pan American, Western European, and Middle Eastern women showing up on the big stage. So much needs to change internationally to ensure a level playing field for EVERYONE, and women are still fighting for the right to lift, so that needs to be taken care of as well.”

Her lifting goals for this year

We hear you on that one, Katherine. Read the full post to see her thoughts on switching to powerlifting and her closest friends on Team USA.

Quebec has its first presumptive case of COVID-19