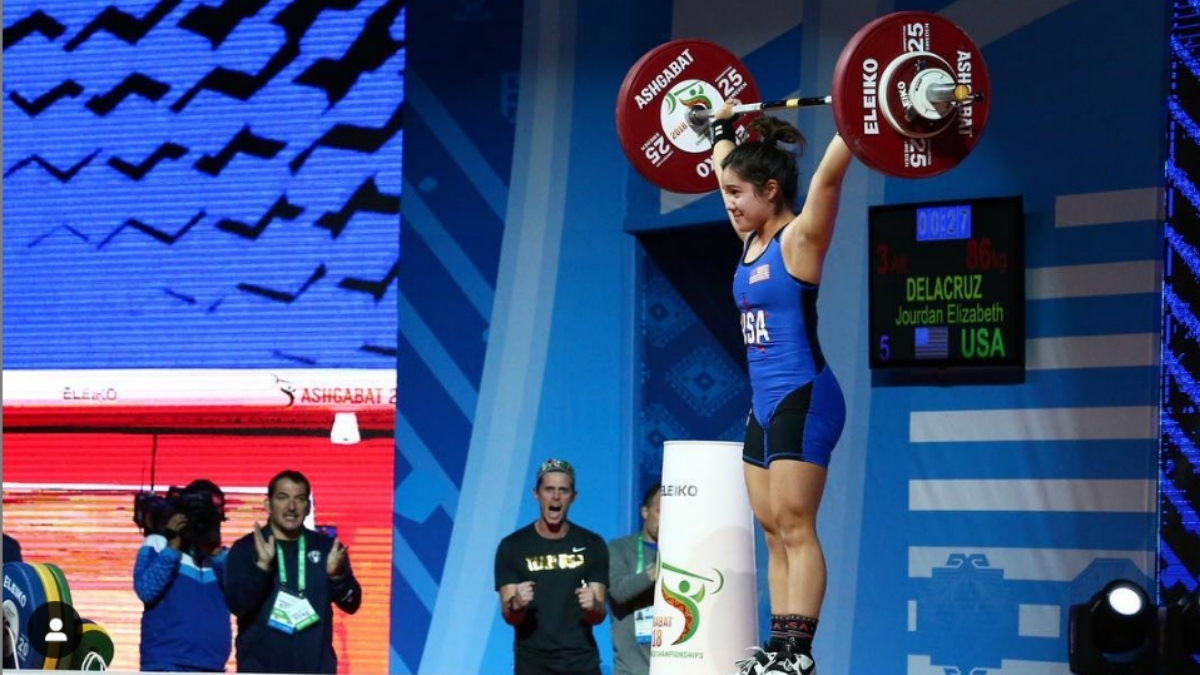 The COVID-19 pandemic affected almost two dozen major weightlifting contests — which were either canceled, postponed, or forced to pivot in another way. How the weightlifting season will pan out in 2021 is still unclear, but that doesn’t mean there aren’t competitive athletes still training and getting ready to dominate on the platform.

On the list below, we’ve compiled 10 women — both newer lifters and prolific record holders — who are primed to do big things in the 2021 season (and beyond).

If you have been paying attention to the American weightlifting scene you would know of Jourdan Delacruz. She’s been crushing American records for years now and owns both the 55-kilogram and the 49-kilogram American records for snatch, clean & jerk, and total. She made her international debut in 2018 at the Junior World Championships and placed second (at 53 kilograms). Delacruz then went on to win the 2019 Pan American Games and Pan American Championships (at 55 kilograms). Then, Delacruz decided to cut to the 49-kilogram weight class, and she won the 2020 Roma World Cup. At 22 years old, this young phenom is just be heating up.

There is really no way to describe this woman other than dominant. Deng Wei hasn’t lost a competition since 2014 and has won five World Championships (or, each she has participated in) as well as the 2016 Olympic Games held in Rio de Janeiro, Brazil. Her most recent wins were the 2019 World Championships and the 2019 Asian Games. Oh, and she also owns the women’s world records for the snatch, clean & jerk, and total at 117 kilograms, 145 kilograms, and 261 kilograms respectively.

If it wasn’t for the fact that China doesn’t have enough spots to bring all of its athletes to the Olympics, Wei may have an even more impressive resume. As of right now they are able to bring four men and four women for the 2021 games. She even missed out on the 2012 Olympic games due to this, where, that same year, she totaled more than the Olympic gold medalist in her weight class. No, Wei isn’t an up and comer, but she’s still a woman in weightlifting to watch in 2021 — and probably beyond.

As of right now, Egypt Is serving a two-year ban due to doping violations. Once that ends, Ahmed is looking to be the first woman from the Arab world to win the Olympic gold for the sport of weightlifting in the 2021 games.

Katherine Nye is always game. When she shows up to competition you can bet your bottom dollar at least one extremely gutsy lift will be attempted. At the 2019 Junior World Championships, Nye missed her opener, made the next attempt on a one-kilo increase, and then jumped a ridiculous five kilograms to set a senior American and junior world record snatch of 112 kilograms.

[Related: How to Gain Muscle — A Guide to Eating for Mass]

Shacasia Johnson is a name you may not know since she’s missed out on a few big competitions — but if you don’t know, now you know.

Johnson competes in the same weight class as Mattie Rogers and Katherine Nye. However, in the background, Johnson has put together outstanding totals, cleaned the heaviest weight in the class (145 kilograms), and even took an American snatch record of 109 kilograms. She also won the gold medal for Team USA at the IWF Grand Prix in 2019. Unfortunately, she lacks the Robi points to qualify for the games. (Robi points are what the IWF uses to determine eligibility for the Olympic games). You earn them by competing in your nation’s national and international events.

The return of the North Korean Queen. Jong-sim is often described as the grittiest lifter to ever touch the platform. After her heart-wrenching 2015 World Championships performance — where she completed a clean & jerk attempt without the full use of one leg due to injury — Jong-sim came back to win gold in the 2016 Olympic Games. (She also won gold at the 2012 London Olympic Games).

Her return this year has already been stacked with gold in that she won the Asian Games and World Championship. Going into 2021, Jong-sim will be the only Female athlete In the sport of Weightlifting to be competing for a third Olympic Games ever. If she were to win,  Jong-sim would be the winningest female in Olympic Games history for Weightlifting.

Then, in 2018, she won her first international competition, taking gold at the Commonwealth Games. Since that break-out performance, Cikamatana has gone for a world record clean & jerk twice and raised the record to 151 kilograms. She made a daring attempt at 159 kilograms (a gutsy, but unsuccessful attempt) in 2019 after a second attempt miss at 150. She has also won the 2019 IWF Grand Prix (at 87 kilograms) and the 2019 and 2020 World Cup (at 81 kilograms).

Eileen has shown she is daring, and for that, she is definitely someone you want on your weightlifting radar.

At just 22 years old, Salazar has been on the podium at two World Championships (2018 & 2019) and one Pan American Games In 2019. She earned Bronze In all of these competitions and has only lost to former Olympic champions or world championships. Salazar competes in a class with insane talent, however, it’s clear that she may soon rise to the challenge and join them at the top of the podium.

For a lifter who has only been at it for three years, Mary Theisen-Lappen is making huge waves on the American scene.

[Related: How Any Kind of Athlete Can Incorporate Olympic Weightlifting and Powerlifting]

She has jerked more than any American female weightlifter (from blocks), a massive 182 kilograms (400 pounds), and is considered a favorite to set a new American clean & jerk record (the current record is 162 kilograms held by Sarah Robles). Theisen-Lappen has qualified for her first Team USA spot this year and will likely spend the majority of 2021 earning a Pan American championship position.

After a strong second-place showing in Li Wenwen’s first international meet, the 2019 IWF World Cup In Fuzhou China, the 20-year-old has gone on to do amazing things.

She competed in both the 2019 Asian Championships and World Championships — and won. At the Asian Championships, Wenwen set the current world record snatch of 147 kilograms. Then, in the World Championships, she snatched just one kilogram below her world record and set two new ones in the clean & jer (186 kilograms) ad the total (322 kilograms). Her impressive performance was punctuated by the fact that she bested Tatiana Kashirina — who has the all-time record total of with a 155-kilogram snatch and a 193-kilogram clean & jerk — in her first six for six performance.