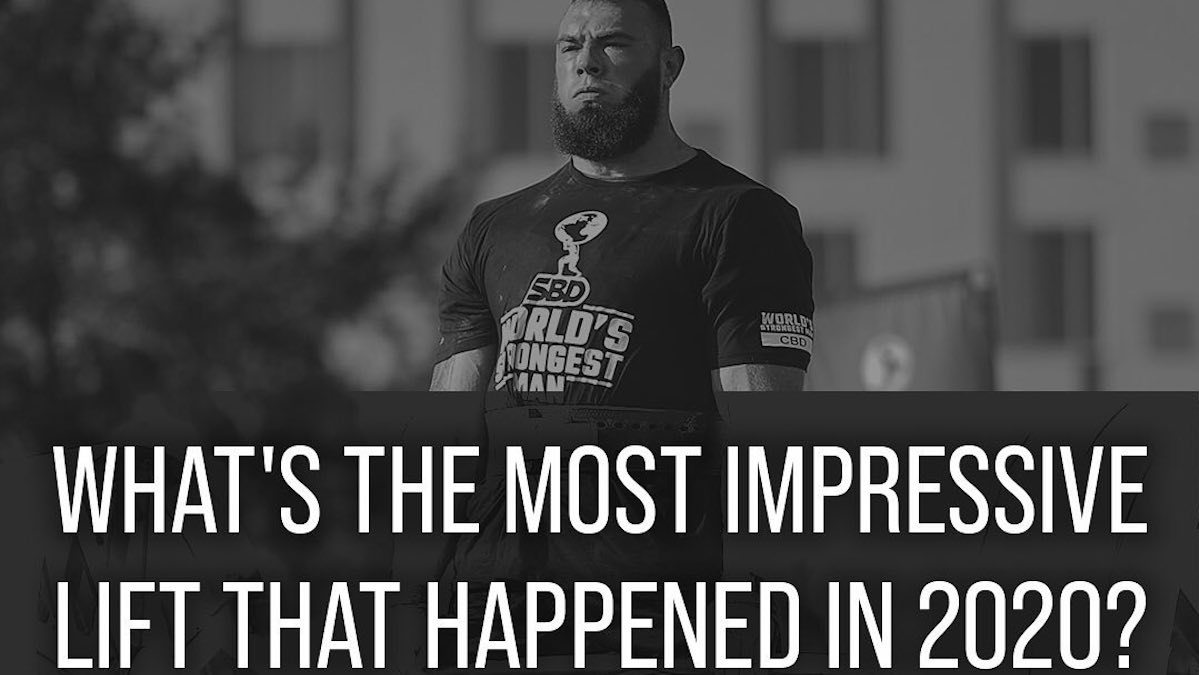 Despite many competitions being postponed, canceled outright, or rescheduled with unique circumstances due to the Coronavirus pandemic — including the 2020 World’s Strongest Man (WSM), the 2020 Reebok CrossFit Games, and the 2020 Olympia weekend — the strength sports world was decorated with dozens of monumental lifts in 2020. There were world and national records set, strength barriers were broken, breakout performances and athletes of all ages moved the needle as to what is possible in the world of strength.

On BarBend’s Instagram page, we shared a post asking you to comment on which lifts of 2020 you thought were the most impressive in any of the strength sports (strongman, powerlifting, Olympic weightlifting, CrossFit, and bodybuilding). We’ve compiled the consensus list of which lifts rose above the rest to be named the most impressive of 2020.

[Related: Everything You Need to Know About How to Increase Strength]

In 2020, gallons and gallons of fuel were poured on the fire, which is the ongoing feud between 2017 WSM champion Eddie Hall and 2018 WSM champion Hafthor Bjornsson. In 2016, Hall became the first human to ever deadlift 500 kilograms (1,102 pounds) at the World Deadlift Championships in Leeds, England. That record stood for four years until Bjornsson decided to break it by a single kilo in the premiere episode of season two of World’s Ultimate Strongman (WUS) “Feats of Strength” series.

If there was a lift heard ’round the world in 2020, it was this deadlift. It is not just because it is the heaviest deadlift ever performed, but because of the controversy that led up to it and the series of events that followed.

Even though all the weights were weighed on camera to confirm that the weight bar weighed 501 kilograms (1,104 pounds) and that four-time WSM champion Magnus Ver Magnusson was the official judge, many of the most influential strongmen in the sport did not think that it should count as the world record because it did not take place in competition. That list includes Hall, four-time WSM champion Brian Shaw, and Robert Oberst.

Following Bjornsson’s successful 501-kilogram (1,104-pound) deadlift — which was broadcast on ESPN — Hall and Bjornsson signed seven-figure contracts to box each other in Las Vegas, NV in September 2021 in what is being marketed as “The Heaviest Boxing Match in History.” Both are now training full time for this bout now that Bjornsson has officially joined Hall in retirement from the sport of strongman.

Although it may not jump out immediately as one of the most impressive lifts of 2020 considering how many there were, many of you cited Mikhail Shivlyakov pulling a Masters deadlift world record of 436-kilograms (962 pounds). (The lift starts at 55:20 in the video below.)

[Related: The Ultimate Guide To Strength Sports For Masters Athletes (And Why They’re For You)]

At the age of 40, Shivlyakov can still deadlift with the best in the world. Before securing this world record, his most notable deadlift was likely his 426-kilogram (940-pound) deadlift with an injured ankle from the 2018 Arnold Strongman Classic (ASC) that turned heads due to Shivlyakov’s propensity to bleed from his nose when lifting extraordinarily heavy.

[Related: What Strongman Will Look Like In 2025 (And Beyond)]

In 2020, Talakhazhe successfully hit the heaviest snatch ever recorded on film — 222 kilograms (489 pounds). That is two kilos over the current world record, which he currently holds.

It should come as no surprise that the Georgian currently holds every the weightlifting world record in the +105-kilogram weight class, all hit at the 2019 IWF World Weightlifting Championships in Pattaya, Thailand:

We learned that many people are impressed by the lifts performed by elite strongmen, and deadlifts in particular. There were a few mentions of 2020 WSM champion Oleksii Novikov‘s WSM partial deadlift world record of 537.5 kilograms (1,185 pounds). However, what garnered a lot of attention was the 2020 WSM third-place finisher JF Caron’s Hummer-tire deadlift world record of 545 kilograms (1,202 pounds) set at the inaugural Shaw Classic. Caron placed second overall in the event.

[Related: The 6 Biggest Moments From The 2020 World’s Strongest Man]

Whittling down the above list wasn’t easy. So, we wanted to shoutout a bunch of other lifts that we think were especially impressive.

If all these impressive lifts were able to be done amidst the trials and tribulations of the ongoing COVID-19 pandemic, then it’s anyone’s guess as to how far the limits will be pushed in 2021 in the world of strength sports. We look forward to a new year of record-breaking lifts and new milestones.