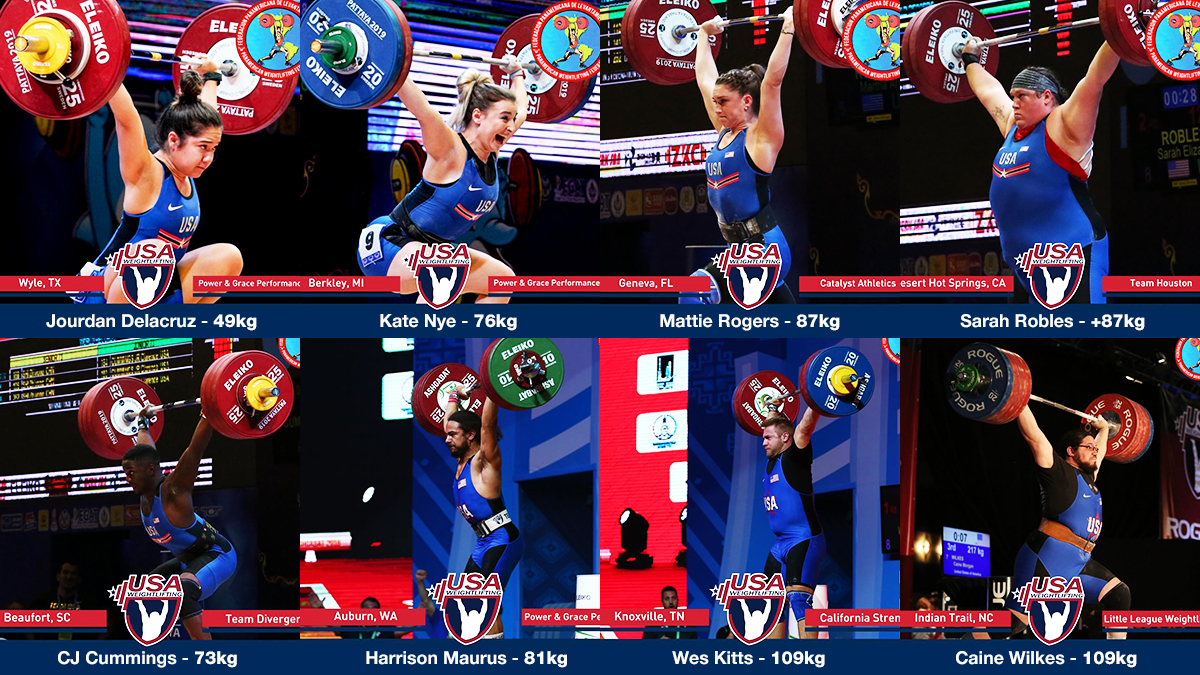 On May 19, 2021, USA Weightlifting revealed the eight athletes — four men and four women — representing America at the 2020 Tokyo Olympic Games. The Olympics will take place from July 23 through August 8, 2021. Weightlifting fans won’t be surprised by the eight names on this list. They are:

Of the eight athletes headed to Tokyo, only Robles has been to the Olympics before. She went to Rio de Janeiro in 2016, placing third at +75 kilograms, and the 2012 Games in London. For the rest of the team, Tokyo will be their first time on an Olympic platform. USAW CEO Phil Andrews told BarBend that this team might be the best they’ve sent to an Olympics in 61 years.

“This team has shown resilience like no other to keep training during the Covid-19 pandemic, and that spirit of determination alone gives our team an advantage this time around,” Andrews says. “The performances of our team, perhaps particularly for Team USA women, shows that the USA is now a world power in this sport. Over the course of the four years since Rio, the quality of the performances and the detailed approach to training around the nation that has been undertaken by our decentralized system, together with the increased domestic competition and so many other things, have pushed the quality of US performances higher.”

Notably, Mattie Rogers will be competing at 87 kilograms — which is quite the jump considering most of her career has been at 69kgs (which is no longer a weight class as of 2018) and 71kgs, and an occasional appearance at 81kgs. Both 71 and 81 kilograms are non-Olympic weight classes, hence why Rogers is making a move up.

Though national competition isn’t indicative of international performance, Team USA has a successful run at the 2020 Pan American Championships. Of the eight athletes on this list, three of them set American and Pan American Records.

Delacruz’s performance at Pan Ams is one of the best of her career. She went six for six, setting an American and Pan American Record for both lifts and the total. There’s no doubt that she’ll be facing tough competition in Hou Zhihui, who owns the snatch and total records (96kgs and 213kgs, respectively). Chanu Saikhom Mirabai of India currently holds the clean & jerk record of 119 kilograms. Delacruz shared some insight into her current plan for the Olympics and how she can improve her results from Pan Ams in Tokyo.

“We are mostly following the same training regimen leading up to Tokyo,” Delacruz says. “We want a big total, so we will push bigger numbers in training. My performance at Pan Ams gives me a clear indication of how I want to feel physically and mentally going into the Olympic Games.”

Early in May 2021, USAW announced the creation of the Hawaii Strong Camp — a facility that will host Olympic athletes and their families. This decision, USAW hopes, will raise the athlete’s spirits as they can train in the presence of their loved ones and save them travel time to Japan since the flight is shorter. International spectators won’t be allowed at the 2020 Olympics Games.

In addition to their families, the younger athletes are fortunate to have the esteemed Robles in their camp. With a Pan American Games and World Championships win under her weightlifting belt and being the oldest woman on the team, Robles feels confident as a leader.

“I’ve been in “leadership” positions for most of my life so, I’m used to having those feelings [of pressure],” Robles tells BarBend. “I feel like I’m approachable and knowledgeable enough to help someone when they need it. If [the athletes] need any help, they can always ask. I’m always going to try to do the right thing for Team USA.”

As for advice, Robles had this to say: “Ask for help when you need it. It’s ok to be nervous. Remember that you earned the right to be here. Take your responsibility of being a representative of the USA seriously and be a good example. ‘USA’ is the most important name on your singlet. As always, like my mom says, ‘Do your best and have fun.’”