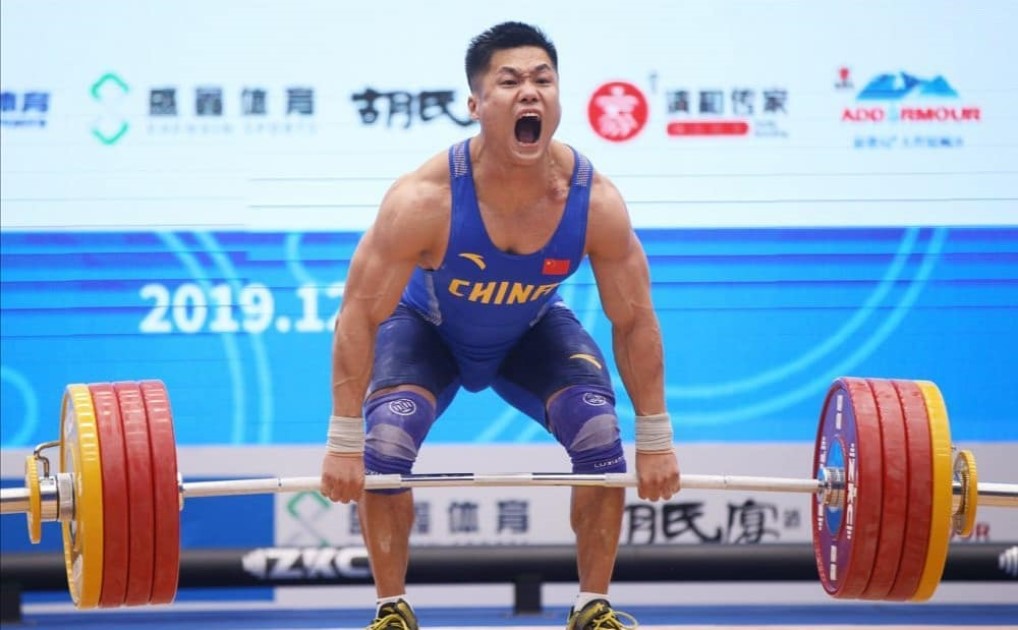 The 35-year-old has set eleven weightlifting world records in his career. Many consider him the best weightlifter alive, but according to Weightlifting House, he has never given an international interview.

Weightlifting House posted a nearly fifteen-minute long interview with the current World Champion on their YouTube channel in two parts, and the second part was finally released this week.

The first minute of the first video highlights just how difficult it was to secure the interview. So much so that when the interviewer was given the green light by Lu’s team, he was not given the name or address of the hotel where the interview would be conducted. When he eventually made it to the hotel late at night, he had to sneak up the back stairwell to avoid being seen by other members of the Chinese weightlifting team or the team’s coaches.

“Lu isn’t really allowed to conduct an interview with non-Chinese media. So the whole team had to be able to deny knowledge of this going on. And as for Lu, he’s just so well respected within China, he’s pretty much free to do as he pleases, assuming it’s relatively covert.”

The interview begins in earnest at 2:28. We’re just pasting a couple of our favorite questions from each video; be sure to watch the whole interviews to hear some of the stuff we left out.

Note: all bolding done by BarBend editorial team for emphasis.

Although he doesn’t mention it, he has also overhead squatted 220kg/485lb. (Most of his PRs happened once he gained weight to enter the -81kg class. In his thirties.)

At -77kg, Lu’s biggest competition lifts came in 2009 with a 174kg/383.6lb snatch and a 203kg/447.5lb clean & jerk. It is tough for him to say if those were actually the heaviest he could lift since he was more focused on breaking the total world record.

If he secured a world record total on his second attempt in the clean & jerk, he would abstain from a third attempt as he would have already secured gold and the world record. It is not definitive if he would have been able to lift heavier in competition as the math during competition was not always conducive to attempting a personal best.

“What has been the key to remaining the best in the world at your age (35)?”

“I would say strength was a priority when I was younger. But as I got older, especially when I hit 30, I started focusing more on the “sensation” of the techniques and how the lifts should feel. (…) And of course, the enthusiasm for weightlifting is pretty important as well.”

Lu defines his commitment to weightlifting at his current age to be entirely self-motivated. The man just loves the sport.

“My age doesn’t bother me because to me it’s not even a thing, it’s just not in my way, it’s not an obstacle.”

[Related: Balancing strength and technique in weightlifting: where do you fall short?]

Here’s the second video — again, listen to the whole thing to hear him talk about competing against his closest friends and his favorite moments from his career.

Did he think you could make it? Did his coach want him to attempt  it? And how much pain was he actually in?

One of the major stories coming out of the 2019 Weightlifting World Championships was how Lu overcame a lower back injury to not only win gold but set multiple world records in the process.

“Actually, the lower back injury didn’t really affect my snatches. I failed my first snatch attempt, of course. In that attempt, I rushed a little bit, and while I tried to save it, my balance moved as I started leaning forward. So I stepped forward to try to save it, which caused the joint dislocation, basically pulling my lower back muscles.”

You can see that failed attempt in the video below from Weightlifting Spirit’s YouTube Channel. The attempt is at 0:42.

Lu attributes not feeling any stress from the lower back injury during the snatch competition because he was “too hyped to feel the pain“. During the ten minute break between the snatch and clean & jerk, Lu remarks,

I could feel the pain in my lower back start to get worse. I assume that probably after you calm down from such a hyped state, your brain starts to recognize the pain. I then realized that I might not be able to make the next lift.

He knew it would be dangerous to make heavy attempts in the clean & jerk saying.

I had to make the choice. It was impossible for me to give up, so my first thought was to fight through. For an athlete of my age, every competition, every attempt becomes highly important. I really wanted to perform well, to nail every attempt, and to not give up any attempt. After my 191kg/421lb clean and jerk attempt, I asked for 205kg/452lb so I could buy some time so that I could rest longer with some ice therapy. (…) The massaging and ice therapy did a great job at relieving some of the stress. I was surprised that the 205kg/452lb was not that bad, so I called 207kg/456lb for the last attempt. I thought to myself, “maybe I can do it.”

Spoiler alert, not only was he able to do it, 207kg/456lb is still the current world record clean & jerk in the -81kg class.

“Perhaps, I just didn’t want to disappoint my supporters,” he muses. “I didn’t want to let them down and leave them with any bad memories. Those supporters are some of my family, they are my friends, and of course they are my daughters to. So as a father and a husband, I felt like it was my responsibility to fight through the difficulties and show them the very best version of myself.”

To learn more about Lu Xiaojun’s main focus in training, how he feels about his main competition, and his favorite moments of his career,  watch the full videos, parts one and two, on Weightlifting House’s YouTube channel.

If you are interested in seeing even more of the interview, there’s footage of Lu Xiaojun discussing his diet, stretching, squat workouts, and more available to donors on Weightlifting House Patreon page. Congratulations to Seb at Weightlifting House for pulling off this extraordinary piece of weightlifting journalism.