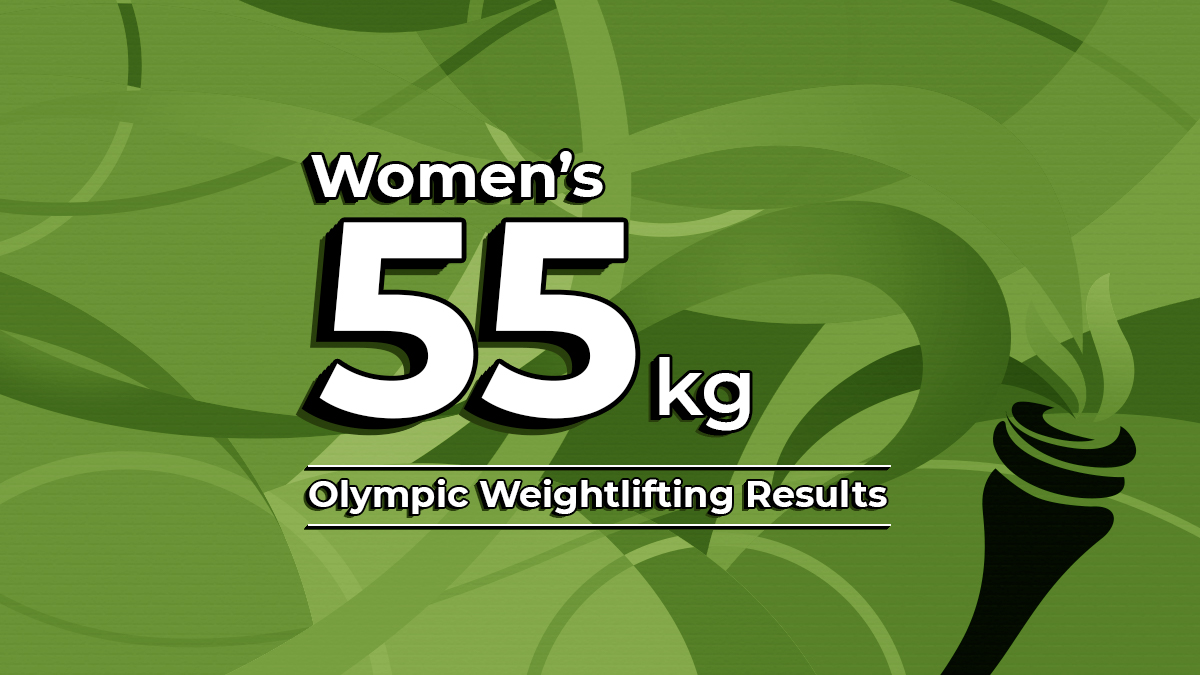 The fourth weight category to compete at the rescheduled 2020 Tokyo Olympic Games was the Women’s 55-kilogram weight class. Groups A and B competed on Monday, July 26, 2021, at 6:50 a.m. 12:50 a.m. EST, respectively. Notably, the winner, Hidilyn Diaz captured the first-ever gold medal for the Philippines. It’s a historic moment that saw her beating China’s Liao Qiuyun, who holds the clean & jerk and total world records. Here are the complete results.

Here are the 14 athletes in the Women’s 55-kilogram category who competed in Tokyo:

Prior to this event, the only attending athlete that medaled at the previous Olympic Games in 2016 was Diaz, who won silver in the outdated 53-kilogram category (new categories were established by the IWF in 2018).

Snatch world record holder Li Yajun of China was overlooked for the Games in favor of clean & jerk and total record holder Qiuyun, who established both records at the 2019 IWF World Championships in Pattaya, Thailand.

The first lift of the day from South Korea’s Eunji was overturned by the jury, setting the tone of things to come as a series of missed attempts from Landoulsi, Shermatova, Chinshanlo, and Lopez Ferrer narrowed the field in the mid-90-kilogram area.

Though Qiuyun did not miss a single lift, she initially reduced her opening attempt from 95 to 92 kilograms. This may have cost her the win in the snatch portion, as her final attempt of 97 landed her in third place behind Qiuyun, who lifted the weight first, and Nabieva, who secured 98 for a new Olympic Record.

A similar story emerged in the clean & jerk, as a series of missed attempts in the 110-kilogram area separated the medal contenders from the pack. The first snatcher to appear, Eunji, faced a do-or-die moment after missing 115 kilograms twice, but secured it overhead on her final try with tremendous effort.

Snatch leader Nabieva received an invalid lift call on two of her three lifts (114 and 117), ending the day with 114 kilograms and opening a lane for Qiuyun, Diaz, and Chinshanlo to gain ground.

The Kazakh opened significantly heavier than her peers with 123 in an attempt to make up her seven-kilogram snatch deficit, but was denied the attempt by the jury due to yet another soft elbow. Qiuyun would follow to hit 123 and establish a new Olympic Record in both jerk and total.

Chinshanlo returned to nail 123 kilograms, followed by 124 from Diaz, taking the Olympic Record total with 221. Chinshanlo declined her third attempt at a declared 125, leaving China and the Philippines each with one lift to battle for gold.

Qiuyun catapulted back into gold medal position with 126, a 6/6 performance on the day, resetting the Olympic Record for a third time. In the final lift of the day, Diaz managed an extraordinary 127 kilograms, winning the session and denying China their fourth gold medal.