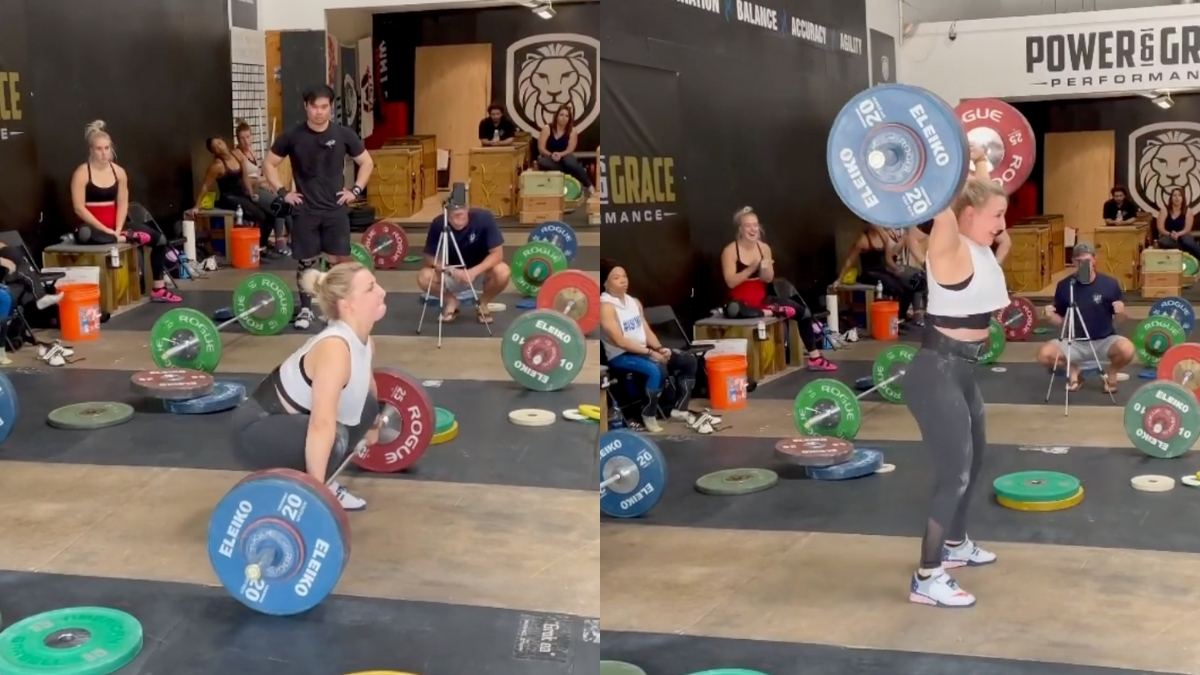 Whether she’s excited about it being Friday or her that her first Olympic Games is on the horizon (it IS the Olympics), Katherine Nye channeled some serious feel-good energy to set a new snatch PR of 114 kilograms. On Friday, Jun 25, 2021, Nye shared the incredible feat on Instagram with a caption that simply read: “Grateful, more to come.” You can check out the 22-year-old’s lift below.

This snatch is two kilograms more than Nye did at the 2020 Pan American Weightlifting Championships, held in April 2021. Competing at 76 kilograms, Nye managed to snatch 112 kilograms and clean & jerk 137 kilos for a 248-kilo total. All three Pan American records in that weight class belong to Nye.

Nye’s recent uptick in power likely results from her training for her 2020 Tokyo Olympic Games debut. Of the entire Team USA Games roster, seven of the eight athletes are new to the Olympic stage. Sarah Robles — who competed in Rio de Janeiro and London — is making her third appearance at the Olympics.

Ok, but back to this snatch. It’s heavier than every other American record — standard or set — in each weight class but +87 kilograms (128 kilograms by Cheryl Haworth). It’s also Nye’s best snatch to date. Period. What makes this lift even more impressive is that Nye is sitting just below her target 76-kilogram bodyweight. In a post made on June 23, 2021, on Instagram, Nye says that she weighed in at 74 kilograms because she was too careful with her macros. On the world level, however, Nye’s competition heats up significantly. The Olympic Standard at 76 kilograms is 121 kilograms. And Rim Jong Sim of Korea holds the current world record snatch at 124 kilograms.

[Related: Weightlifter Laurel Hubbard Will Be the First Openly Transgender Athlete to Compete in the Olympics]

Of course, if anyone can step up to the plate, it’s probably Nye. At just 22 years old, Nye has won a World Championships (in 2019 at 71 kilograms), a Pan Am Championships (in 2019 at 71 kilograms), won the International Weightlifting Federation’s Female Lifter of the Year award, and was named to Forbes 30 Under 30 list. Her best clean & jerk to date is 137 kilograms, but hand the woman a pair of blocks, and she’s been known to clean as much as 150 kilograms.

On to the Olympics

The Olympic Games are set to take place in Tokyo, Japan, from July 23 through August 8, 2021. Before heading to Japan, however, Team USA will ship out to the USAW Hawaii Strong Camp to prepare in a bubble with their families and friends to raise morale. Here’s the full roster of athletes representing America in weightlifting in the Olympics: