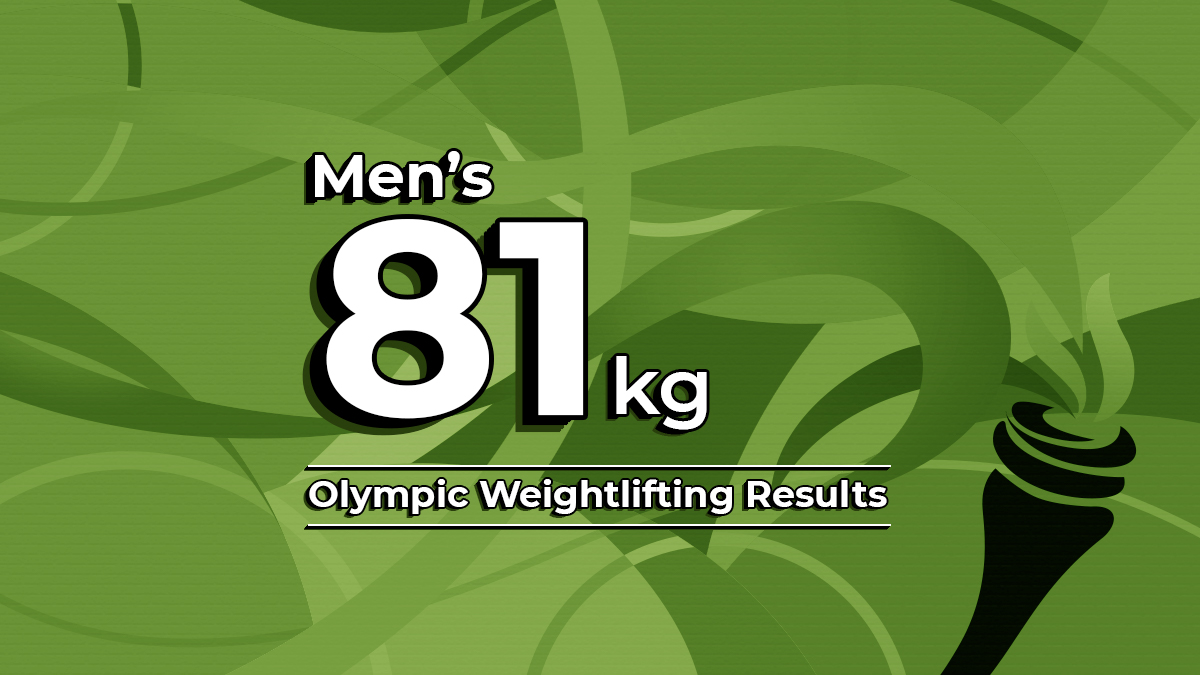 Here are the fourteen athletes in the Men’s 81-kilogram category who competed in Tokyo:

Xiaojun was the 2016 Rio Olympic Games silver medalist in the 77-kilogram class (new weightlifting categories were approved by the IWF in 2018). 2016 Games gold medalist Nijat Rahimov was not in Tokyo due to an anti-doping violation charge. 2016 Games bronze medalist Mohammed Ihab retired from the sport in 2019.

Team USA’s Maurus was the first to emerge in the snatch portion of the competition, posting a successful first lift at 153 kilograms. He was followed subsequently by Mata of Spain and Germany’s Muller, each making lifts at 154 and 155 kilograms, before a period of backstage jockeying stalled the competition as multiple lifters adjusted their attempts upward.

2017 World Champion Mendez of Chile was the first to break the 160-kilogram barrier with his first lift. Maurus would emerge shortly after to make 161 on his final attempt. Muller emerged to take the same weight and hoisted it successfully but was called by the jury after the fact for a wobbly elbow, having the lift overturned to the tune of audible jeers from the spectators.

Rodallegas of Colombia emerged to take his first lift at 163, which pinned him and required a moment of adjustment before standing, but was successful. An uncommonly rowdy audience unnerved Bonnat Michel on his second attempt at 163, something that Suharevs would avoid with a commanding third attempt at 163.

The presence of three-time Olympian and snatch legend Lu Xiaojun of China seemed to unnerve competitors Pizzolato, Rodallegas, and Rejepov in the final stretch of the snatch portion.

Though Pizzolato, in a rare occurrence, was able to contend with Xiaojun for their first two respective attempts at 165 kilograms (each missing the opener), a series of missed attempts from the remaining competitors between 165 and 168 left the field open for 37-year-old Xiaojun, who clinched 170 kilograms on his third try to win the snatch portion.

The clean & jerk portion opened to controversy as Mata Perez very nearly registered an incomplete performance, missing his first two attempts at 189 kilograms but guaranteeing it on his third. Subsequent attempts from Mendez and Muller indicate a very tight competition to follow as the barbell rapidly ascended towards the Olympic Standard of 201 kilograms.

Mendez, nursing his wrist and hip, failed to complete a lift at 190 kilograms, disqualifying him from the event. Rejepov, Rodallegas, Maurus, and Muller would all appear for the first time at 195, though only Maurus would succeed to lift the weight on his first try.

Snatch leader Xiaojun emerged earlier than expected to lift 197 kilograms with his iconic squat jerk and guarantee both a total and likely medal. Suharevs would conclude his performance with a failed jerk at 198 kilograms due to his knee touching the platform in his split position.

Rejepov appeared to take 198 in a do-or-die attempt to secure a total. Although he hoisted it successfully, a preemptive slam of his barbell before the down signal incurred a jury intervention, overturning the lift. Despite an attempted challenge from the Turkmen coaches, the jury disqualified his Olympic performance as incomplete.

Pizzolato emerged as the heaviest lifter to begin with a dominating lift at 200 kilograms. Maurus, hot on his heels, came out after an extended break to successfully lift 200 as well. Rodallegas would try the weight for his third attempt, but failed, ending the day with 196.

Bonnat Michel and Pizzolato took 202 and 203 on their second lifts, followed by Xiaojun, who nailed 204 to extend his lead. Bonnat Michel would match the 204, guaranteeing a medal position. Maurus made a heroic effort with 205 to get back at the podium, but couldn’t stick the jerk.

Pizzolato gave his all with the penultimate lift of the event at 210 kilograms. Though he cleaned the weight successfully, he couldn’t make the jerk. With the final lift of a very contentious session in the hands of Xiaojun, he attempted 210 kilograms. Though he failed to stand up the clean, he recovered with a big smile as his total had secured him a second Olympic gold.